If you’ve got slugs and snails feeding on your crops, ornamentals, or flowers, the damage will begin showing up very quickly.

They will shred leaves, leaving behind ragged holes or just the ‘ribs’ and will bore circular holes in underground crops.

They can lay 30 eggs at a time so as soon as you suspect you have a slug and snail infestation, you need to figure out how to get rid of them right away. 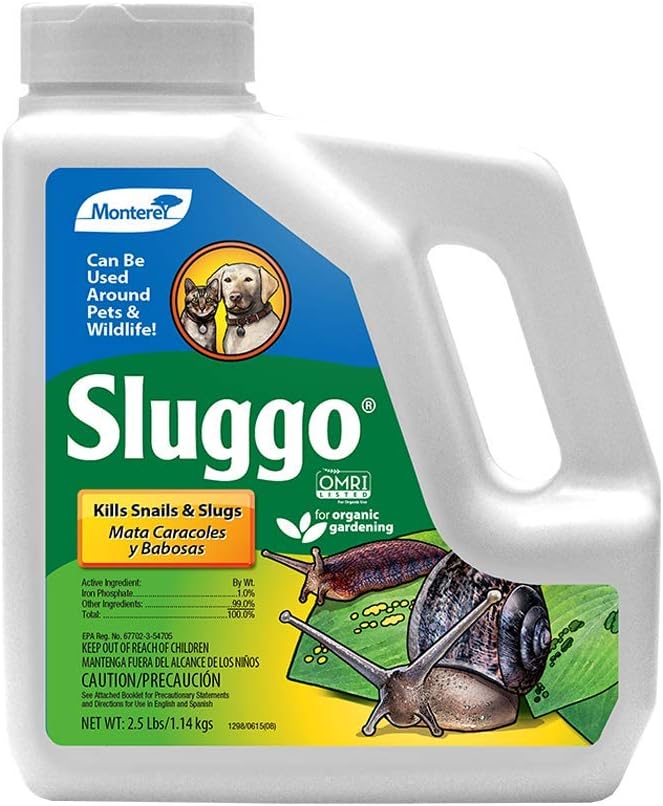 VIEW ON AMAZON
Sluggo Wildlife and Pet Safe Slug Killer
The active ingredient is iron phosphate, so it’s safe around pets and children. It comes in a granular form that is easy to apply and spread.
FEATURES

We’re going to explain what slug bait is so you can use it to eliminate them, along with what is in it, how to use it, and what to expect when you do.

We’ll also explain the differences between slugs and snails. 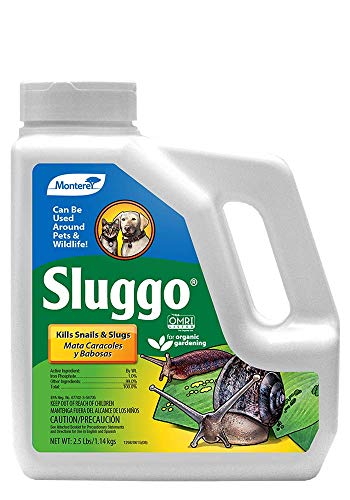 We chose Sluggo Slug Killer because it is one of the best and most popular slug and snail baits available.

The active ingredient is iron phosphate, so it’s safe around pets and children. It comes in a granular form that is easy to apply and spread.

It’s a two-in-one bait that has added ingredients to attract kills slugs and snails. Once they eat it, they begin dying within three to six days.

It is OMRI-listed, so it’s safe for organic farming. It’s also extremely popular with consumers.

Check out our list below for a summary of our results. Keep on reading to learn more about slug and snail killers.

What Are Slug (and Snail) Killers?

They’re a bait that slugs and snails are drawn or attracted to. They eat it and get the poison. They soon stop eating and within a few days, it kills them.

Some baits have extra ingredients added to them to increase their attractiveness to slugs and snails.

Depending on the active ingredient in the bait, it could take from three to seven days to kill a slug or snail once they’ve eaten the bait.

While they are dying, they’ll return to their hiding places so you won’t necessarily find their dead bodies or shells.

Slugs and snails are both mollusks (phylum Mollusca) in the class known as Gastropoda. They are close relatives. The main difference between them is that slugs don’t have shells and snails do.

During times of low humidity or temperature extremes, snails can retreat into their shell and seal the opening using a thin layer of hardened mucus and calcium that is called an epiphragm.

Because they don’t have a protective shell, slugs prefer to spend more time underground than snails do. This makes them extremely destructive toward root crops of all kinds, buried seeds, and seedlings.

Snails and slugs share the same diet, require the same environmental conditions, and have the same reaction to baits. As a result of their close relationship, any bait that will kill slugs will also kill snails and vice versa.

How Do Slug (and Snail) Killers Work?

Each active ingredient has a different mode of action. We’ll look at each one in turn.

Are Slug (and Snail) Killers Effective For Killing Slugs and Snails?

They are very effective. Most of the active ingredients used in slug baits will kill the slugs and snails within a week. Some will kill them in only three days.

However, not all of them withstand heavy rain very well and will have to be reapplied frequently.

How To Use Slug (and Snail) Killers

Slugs and snails are most often active during periods of warmth and high humidity or rain. They prefer their food in the same condition, therefore the best time to distribute the bait is in the evening around sunset.

This prevents the sun from drying the bait and making it unpalatable to them. The baits should be broadcast as evenly as possible.

Don’t let them clump up in piles. Moisture can become trapped in the piles and the bait will get moldy.

Most of the baits should be kept off the plants you’re protecting. After spreading the bait, go back and briefly shake the plants to knock any pellets off them.

Check the bait after you water your lawn or garden and after each heavy rain. Some of them, such as sulfur-based baits will be washed away and you’ll have to reapply them.

Others, such as metaldehyde and iron phosphate-based baits will withstand the rain.

Are Slug (and Snail) Killers Safe Around My Pets and Children?

Baits that use metaldehyde as the active ingredient are not safe around pets or children and should be restricted to those areas pets and children don’t have access to.

Greenhouses are a good example of a safe place to use metaldehyde-based baits.

The other active ingredients are generally regarded as safe around pets and children.

How Do You Find the Best Slug (and Snail) Killer?

Sluggo is one of the best slug and snail baits available. The active ingredient is iron phosphate, so it’s safe around pets and children.

It comes in a granular form that is easy to apply and spread. It’s a two-in-one bait that attracts and kills slugs and snails.

It is still effective after it rains or you water the lawn or garden. It is OMRI-listed, so it’s safe for organic farming and it begins killing slug and snails within three to six days.

It’s also extremely popular with consumers. However, it won’t kill anything except slugs and snails. 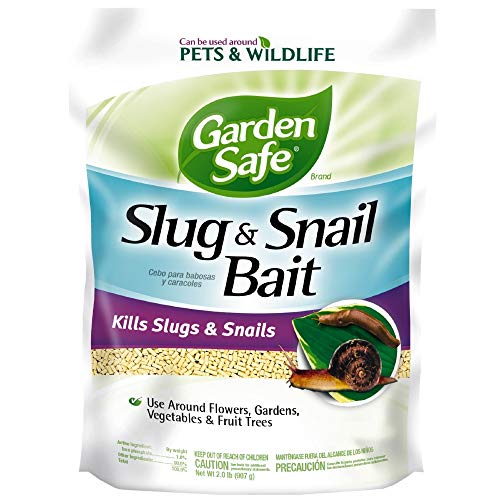 This bait uses iron phosphate as the active ingredient, plus other additives that make it attractive to slugs and snails.

Scatter the pellets around the lawn or garden where slugs and snails are fond of feeding. They’ll eat it and die within a few days to a week.

It’s safe around pets and children, OMRI-listed for organic farming, and kills snails and slugs within three to six days. It should be put out in the evening just before they begin coming out to feed.

However, it won’t kill anything except snails and slugs. 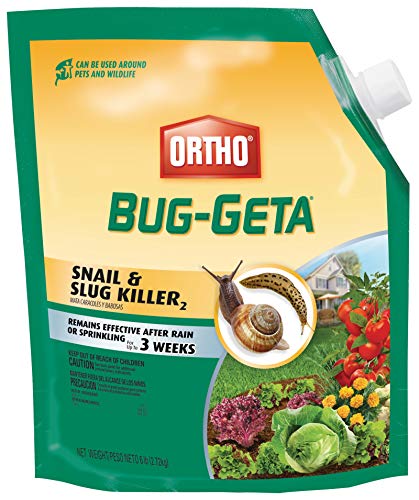 The active ingredient in Ortho Bug-Geta Snail and Slug Killer is sulfur. It remains effective for up to three weeks after it has been applied to your lawn, garden, or in your greenhouse.

It’s easy to apply; there’s no mixing or spraying required.

It is safe around children, pets, and wildlife but the white pellets really draw attention to themselves in the garden, detracting from the aesthetics of your lawn, flowerbeds, or garden.

Watering the yard or garden, or steady rain, will dissolve the pellets and you’ll need to reapply them. It kills slugs and snails, but not as fast or effectively as iron phosphate-based baits. 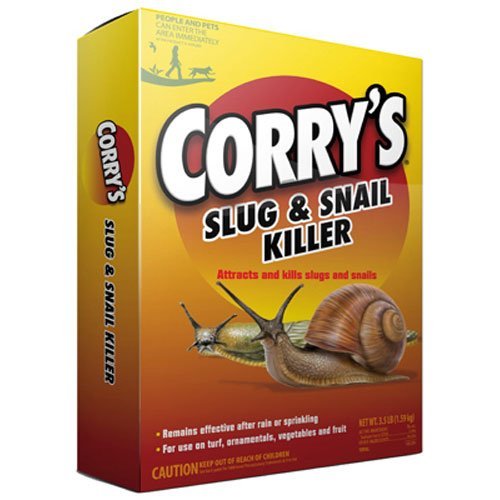 The active ingredient is 5% sodium ferric EDTA. The EDTA makes the ferric (iron) work faster than iron phosphate, killing slugs and snails in three days instead of three to seven.

It’s not OMRI-listed but it can still be used around the turf, ornamentals, vegetables, fruit, and other edible crops.

It will remain effective for about two weeks before you need to spread more. It also has to be replaced and reapplied after a heavy rain. 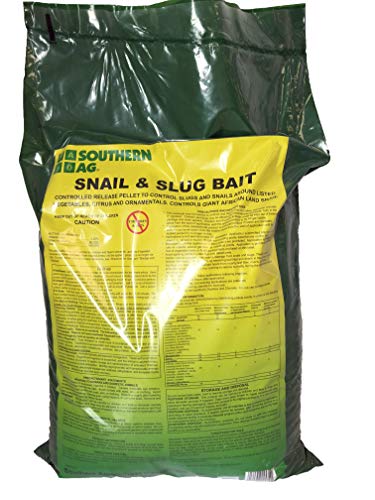 It should never be used where any of them have access to it.

Due to its high toxicity, it only requires one pound of the pelletized bait to treat up to 1500 square feet. It kills slugs and snails very quickly, won’t wash away in heavy rains, and is an excellent choice for commercial operations or inside greenhouses.

It’s not OMRI-listed for organic farming but is suitable for any other kind of farming, just so long as you’re very careful when using it.

The active ingredient is iron phosphate, which means it’s safe around pets and children.

It comes in a granular form that is easy to apply and spread. It’s an OMRI-listed, two-in-one bait that attracts and kills slugs and snails.

This popular slug and snail killer is still effective after it rains or sprinkling is done. It works very quickly, killing slugs and snails within three to six days.

Older snail baits containing metaldehyde still work but the high toxicity levels make them dangerous. We included one of them for those who want it, but the new iron phosphate baits work almost as fast and are as close to 100% safe as anything can be.

Give the Sluggo Wildlife and Pet Safe Slug Killer a try and you’ll be killing snails and slugs before you know it.

Curious about other lawn and weed related products? Check out our other detailed guides to help you deal with your pest problems.