Despite children’s cartoons about that “waskly wabbit”, the simple fact is, rabbits have been a major cause of damage to flowers, gardens, and crops for centuries. ​

A single rabbit can eat 115 pounds of herbage per acre per year!  That’s a lot of damage.

Due to their rapid reproductive rate, rabbits have the potential to quickly overwhelm your garden and flower beds.

Although fencing is certainly an option for keeping them out, the expense can be prohibitive.

In this Pest Strategies review, we’ll show you a better, cheaper way to keep rabbits away.

We’ll explore several types of rabbit repellents made from natural ingredients, as well as one surprising repellent you might not have considered or even heard of. 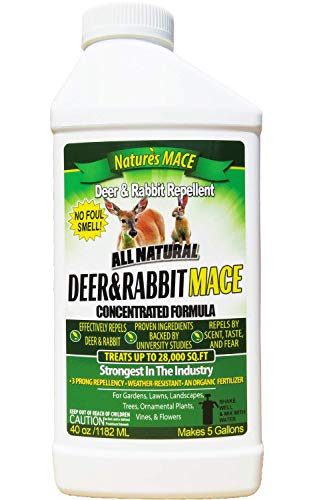 We chose this rabbit repellent concentrate because it uses a triple combination of scent, fear, and taste to repel rabbits.

The active ingredients are putrescent egg solids, garlic, mint oil, and white pepper.  Once it dries, it lasts for three to four weeks.

This 40-ounce bottle of concentrate makes five gallons of repellent spray.  It’s environmentally friendly as well as safe for pets and people.

It can be used all year-round and doesn’t have any odor once it has dried.

Check out our list below for a summary of our results. Keep on reading to learn more about rabbit repellents.

What Are Rabbit Repellents?

A rabbit repellent is any substance that causes rabbits to flee from them or show aversion or distaste for the smell and/or taste.

Fences are also considered repellents but aside from noting they’re an option, we’re not considering them here.

Instead, we’re looking at natural ingredients or special chemicals that will repel rabbits when they encounter them. Some of the repellents we’ll consider prominently mention deer on the label because rabbits and deer are usually repelled by the same things.

Many plants are also considered as deer or rabbit repellents based on the fact these plants are unlikely to be eaten by them.  Please note; “unlikely” doesn’t mean “never” so using these plants isn’t a sure-fire way of keeping rabbits away.

How Do Rabbit Repellents Work?

Rabbit repellents work in one of three main ways.  Often they are combined in one product.  The methods are fear, smell, and taste.

Plants that repel rabbits are usually in this class. They will probably sustain some rabbit damage but it will be minor.

Like all repellents, rabbit repellents work on a percentage basis. This means they will be successful only in a certain percentage of cases. The percentage might be as high as 95%, but it will never be 100% effective.

Many rabbit repellents aren’t designed to be used directly on the plants grown for human consumption. The ground around them can be treated or the leaves can be treated (lightly) but the edible parts aren’t where the repellent is meant to be applied.

How To Use Rabbit Repellents

A repellent spray should be sprayed around the base of each plant and on the non-edible leaves.  A wide band, four to five feet wide can be sprayed along the outside border of the garden or flower bed you’re protecting.

Are Rabbit Repellents Safe Around My Pets and Children?

None of the active ingredients are toxic in and of themselves, therefore they are safe around people, children, and pets.  The wet repellents have a strong smell when they’re first sprayed, so keeping the kids away is a good idea.

The sole exception is the fertilizer-repellent.  Keep the kids away until it’s been watered in.

How Do You Find the Best Rabbit Repellent?

Look for a repellent that mentions either deer or rabbits on the label.  Both are repelled by similar fears, odors, and tastes.

Stay away from anything that claims it can also repel insects.  It either contains an insecticide or it’s a fake.

This combination creates a mixture of offensive smells, fear, and bad taste to discourage rabbits from nibbling your garden plants.

For large gardens or to treat the whole yard, a backpack sprayer is recommended.

This natural rabbit repellent is environmentally friendly and harmless to people and pets.  It’s designed for year-round use and doesn’t smell once it has dried.

It can be washed away quite easily when it rains though, so you’ll have to reapply it. 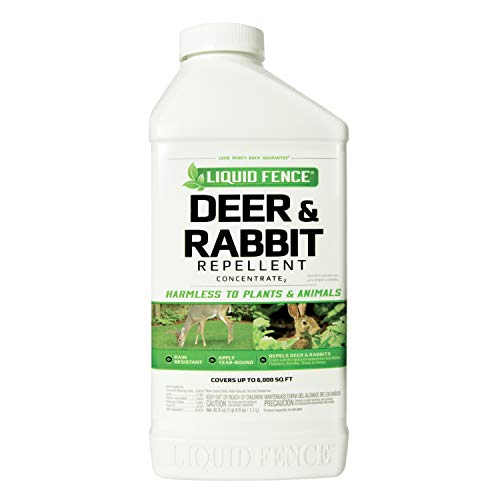 Liquid Fence is an industry leader in repellent products for deer, rabbits, raccoons, and other critters.

This concentrate uses putrescent egg solids and garlic, among others, as the active ingredients so there is definitely a strong odor when it’s wet.

This 40-ounce bottle of concentrate will cover 6000 square feet, more than most other concentrates or granular repellents.

This rabbit deterrent is long-lasting too, up to two weeks initially, then up to four weeks after the second treatment.

Like all liquid repellents, it can be washed away by a heavy rain.  It’s safe and harmless to people and pets but you shouldn’t use it on edible crops or plants intended for human consumption.

It is also a good deer repellent if you’re having deer trouble. 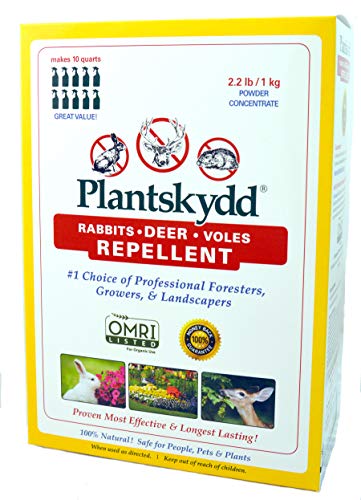 This concentrate is a soluble powder from Plantskydd.  It’s OMRI (Organic Materials Review Institute) listed, which means it meets the requirements for organic farming.

The active ingredient is dried porcine and/or bovine blood so don’t spray it on edible plants.

The scent of blood creates a fear reaction that will repel rabbits.  Because it’s a powder, once it dries it is rain-resistant and will last for two to four weeks during the growing season, three to six months during the dormant season.

It’s safe for people and pets and has a long shelf life in its original packaging, up to five years if it is tightly resealed. 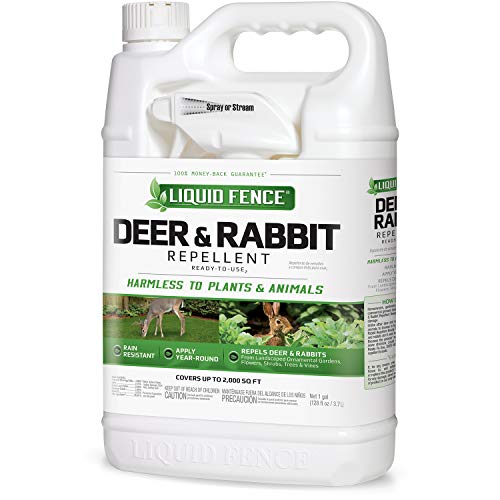 This is a premixed, ready-to-use version of the Liquid Fence concentrate for those of you who don’t want to go through the hassle of measuring and mixing.

It contains all the same active ingredients and works the same way.

It comes with a built-in spray top that attaches to the jug via a coiled-loop tubing that stretches two to three feet for convenient spraying.

This repellent lasts just as long as the concentrate and works the same way.

Like all liquid repellents, it can be washed away by a heavy rain.  It’s safe and harmless to people and pets but you shouldn’t use it on edible crops or plants intended for human consumption.

It is also a good deer repellent if you’re having deer trouble. 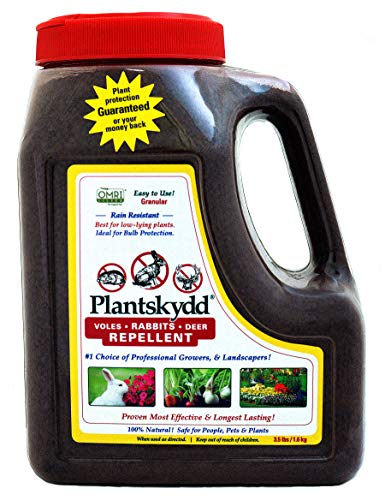 This is the granular version of the soluble powder discussed earlier.

The active ingredient is 100% dried blood, porcine and/or bovine but no animal parts were used.  This 3.5-pound jug covers 1750 square feet.

It’s OMRI listed and lasts for six to eight weeks during the active growing season.  It will get rid of rabbits along with deer, voles, squirrels, chipmunks, and other critters.

You’ll need a hand spreader to broadcast the granules over the area being treated.

It’s safe for people and pets but don’t put it directly on the edible part of plants you’re treating.  For bulb protection, sprinkle it into the holes and around the planting site.  It won’t wash away in heavy rain. 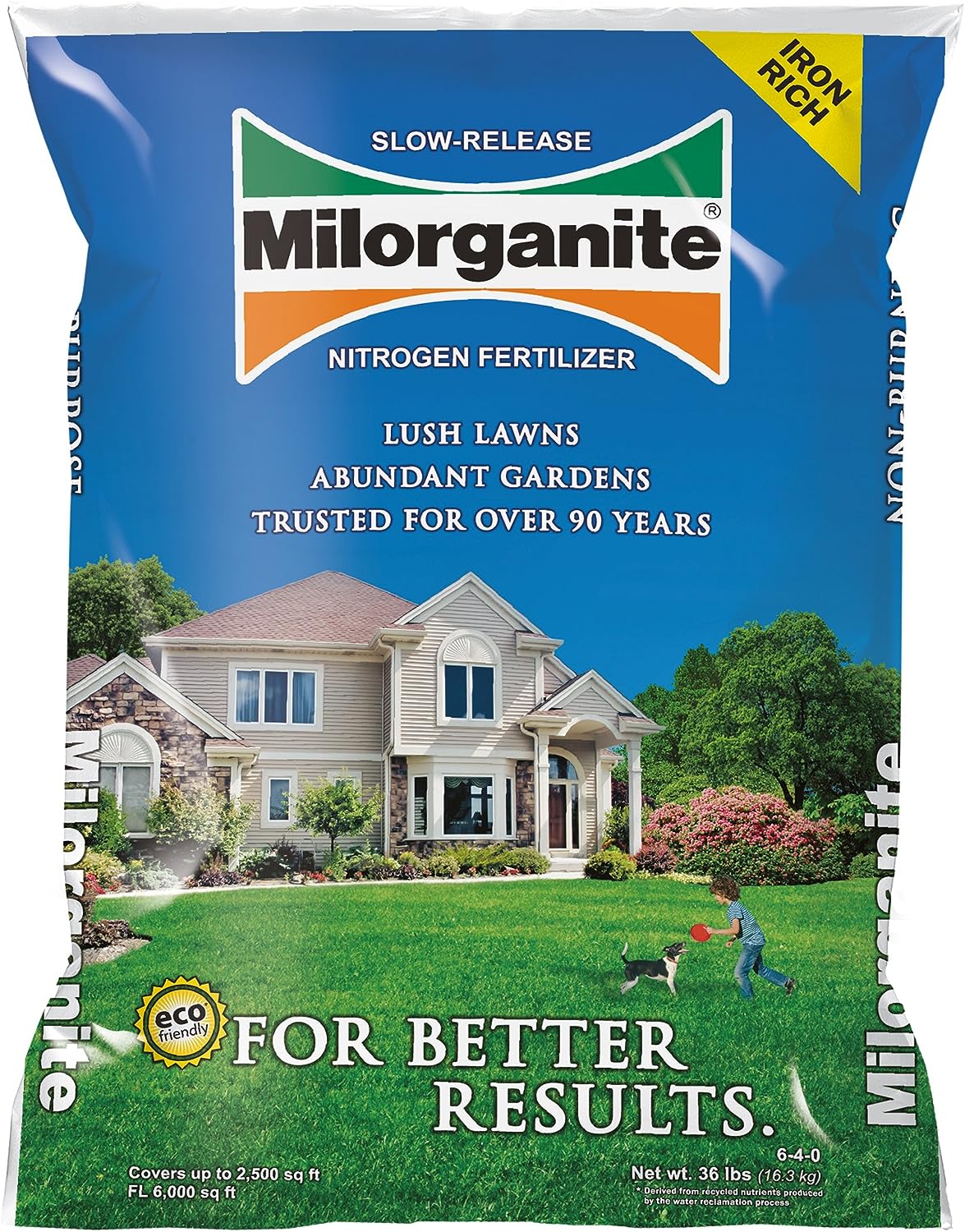 Milorganite® is an artificial word made from MILwaukee ORGAnic NITrogEn.  Beginning in 1919, the Milwaukee Sewage Commission began researching a new fertilizer.

Then, the University of Nebraska research in 2013, discovered Milorganite® was an effective rabbit repellent as well as an excellent source of fertilizer.

It doesn’t stop rabbits completely, but it puts a significant damper on their activities.

It comes in a 36-pound bag for just over $20. It’s intended for outdoor use so it’s usable in all weather conditions, repels rabbits, and fertilizes your lawn and garden at the same time. However, it is a fertilizer so it has a rather pungent smell.

The 40-ounce bottle of concentrate makes five gallons of repellent spray, it’s environmentally friendly, safe for the whole family, lasts for several weeks, and doesn’t have any odor once it has dried.

You can use granules, ready-to-spray repellents, concentrates, or Milorganite® to repel rabbits so they stay away from your vegetable garden, flower beds, and small trees.  The Milorganite® by itself or in combination with any repellent for a great one-two punch.

Curious about other lawn related products? Check out our other detailed guides to help you deal with your pest problems.