Two things that we can all do without this summer are wasps and chemicals.

That's why we're bringing you the inside scoop on the best wasp repellents (pesticide-free!) for 2020.

In our detailed guide, you'll be able to brush up on: 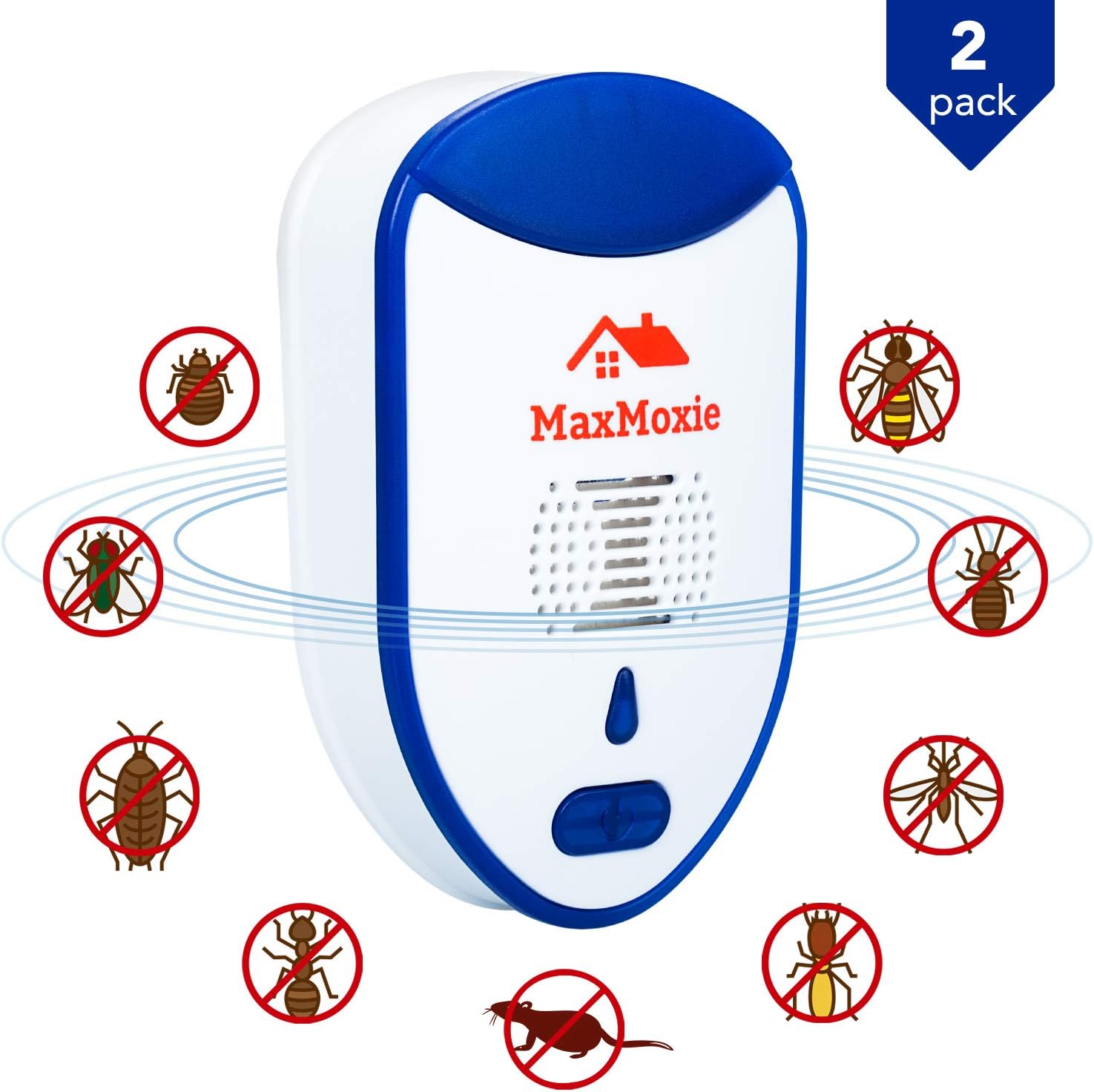 VIEW ON AMAZON
MaxMoxie Humane Ultrasonic Pest Repeller
Essentially, it's exactly what you want to find in a wasp repeller--something to get the job done, and get the job done right.
FEATURES 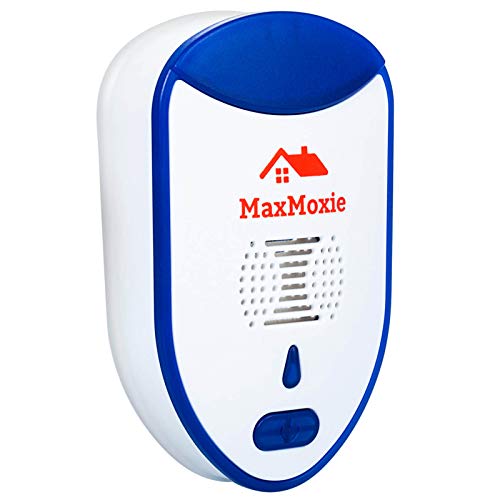 Each product we reviewed is effective, but our favorite was the MaxMoxie brand repeller.

Well, this particular repeller has a ton of strong points: it's easy to use, it's affordable, and it's got a large coverage area, and it works well in all climates.

Here's the short story on how it works: the small, handheld device plugs into an outlet on the wall, and immediately begins pinging signals that are annoying to pests. If humans can hear this auditory signals, it's barely noticeable. However, to bugs, it's miserable. As a result, wasps fly away from your garden.

If you don't want to use any kind of ultra sonic device, a new wasp repeller we found that we really like is the Wasp Decoy. Since wasps are territorial, if they see an existing nest, they'll go elsewhere, keeping your home wasp free. It appears to be getting some nice results and is worth checking out!

We've got a full list of products broken down for you, as well as a lot of useful information about wasp behavior and some of the science behind these bugs. If you've got a little time, take a look below!

Why Do I Have Wasps At All?

Sometimes, knowing the best way to drive wasps off your property is understanding what brought them there in the first place.

By taking a few moments to learn about what lures wasps in, you'll be able to better focus on how to take them out.

Are Wasps Attracted to Vinegar?

In 1998, a study was conducted by an entomologist from the USDA in the state of Washington which found that German yellow jackets (a related species to wasps) were attracted most strongly to a cocktail of fermented molasses and vinegar.

The vinegar itself wasn't necessarily the key to the attraction, but rather the molasses. Most wasps drink nectar in the wild, and crave sugary substances whenever they're on the hunt for a place to land.

In fact, in studies conducted by the USDA in December 2014, wasps were shown to prefer wine over vinegar.

Think back to all those evenings on the terrace spent swatting wasps away from your crisp glass of Pinot Grigio. It makes a little more sense now that there's some scientific backup, doesn't it?

The sugary breakdown of wine makes it irresistible to wasps (not to mention fruit flies), and when they get a whiff, they feel the urge to dive right in.

There's nothing more refreshing on a hot summer's day than diving into the pool, right?

Wasps think so, too.

When the temperatures rise in summer, wasps (as well as hornets and bees) love to take sips from pools and ponds in order to hydrate. A lot of the time, they'll lose their balance and fall in, which leaves them struggling for their lives until they inevitably drown after treading water for a few minutes.

Of course, the water itself will kill the wasps if they fall in, but the bigger problem to worry about here is that thirsty wasps are attracted to ponds, pools, and other large bodies of water. They will swarm around stagnant puddles or pools in order to gain fast access to a hydration source, so this is an ideal place to install a wasp repeller system.

Why Use Ultrasonic Devices to Repel Wasps?

If you're trying to repel wasps, why shell out for an electronic device when you've got a can of good old bug spray in the medicine cabinet?

Keep reading to understand the benefits of substituting technology for a role chemicals used to play in our daily lives.

An ultrasonic pest control device works the same way for pretty much every pest, ranging from wasps to mice:

All you have to do, essentially, is plug in the device and ensure to follow best practices when it comes to preventing new infestations in your yard and garden.

Check out the video below for an interesting wasp removal situation.

With an ultrasonic pest repeller, you and your family have zero interaction with pesticides or insecticides, period.

The devices work completely through ultrasonic energy, which means that you're never handling chemicals in order to eradicate a pest. The machines don't emit any sort of insecticides, dusts, or sprays, making them a recommended option for those with little ones, pets, or all of the above.

You Won't Notice Them

Speaking of kids and pets--you probably need to find a solution to your pest problem that won't bother your dog or your kids, right?

That's the beauty of ultrasonic pest repellers: they're super effective on the minute bodies of insects and vermin, irritating them to the point of misery. When it comes to larger bodies like cats, dogs, and humans, however, the energy from the devices is negligible (if noticeable at all).

It must be said, though, that ultrasonic pest repellers are NOT recommended for users with pet hamsters, gerbils, rats, mice, and guinea pigs. Their bodies are within the target range and will probably become annoyed by the ultrasonic energy from the device.

Does Liquid Repellent Work Against Wasps?

However, our guide recommends ultrasonic repellers for a few different reasons.

In addition to all these reasons, many liquid repellents on the market today still contain DEET, a chemical developed by the United States Army to protect soldiers fighting in areas with high insect infestations during World War II. Check out the video below for a crash course on DEET and whether or not it's dangerous.

This is first pick because of its price point in comparison to the rest of the market.

MaxMoxie has developed a device that works impeccably to repel not just wasps, but hornets, yellow jackets, bees, ants, mosquitoes, spiders, roaches, and all sorts of bugs...without a steep price tag.

This wasp repeller is recommended to those who have a smaller home or wasp-infested area and don't need to shell out to cover a larger area. It also comes in a 2-pack, so you can place the devices at opposite ends of your property and let them work their magic to drive away the wasps for good. 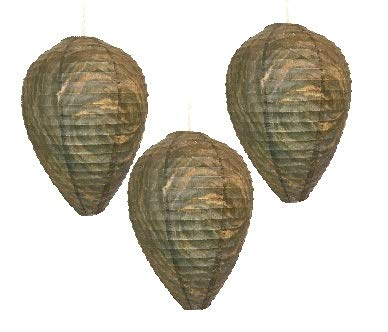 An interesting approach to repelling wasps is setting up a decoy nest. This approach takes advantage of wasps' natural territorial behavior.

The Patio Eden Wasp Decoy does a fantastic job of imitating what an actual wasp nest looks like. It measures 8x11 inches and comes in a pack of three.

It's also worth noting that any existing nests should be destroyed prior to hanging a decoy wasp nest. 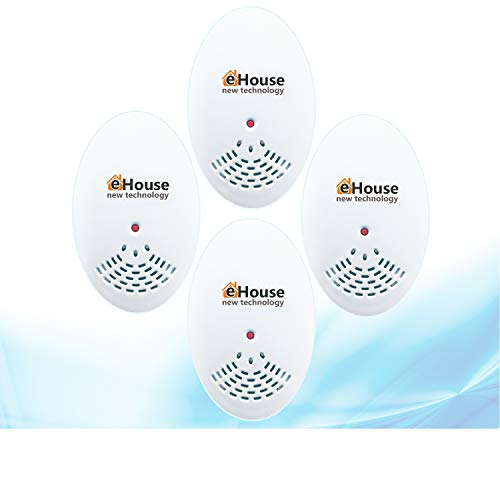 This wasp repelling system covers a much wider range at 1600 square feet compared to others. On top of that, it comes in a 2-pack, meaning that you'll have 3200 square feet of coverage against wasps when using both repellent systems at once.

In addition, these two repellent systems only use between 4 and 6 volts of electric energy at a time, meaning they won't run up a monstrous charge on your electric bill.

This is an all-around awesome product from a well-trusted brand that we would highly recommend to anyone who wants to scare away the wasps without the use of chemicals and pesticides. 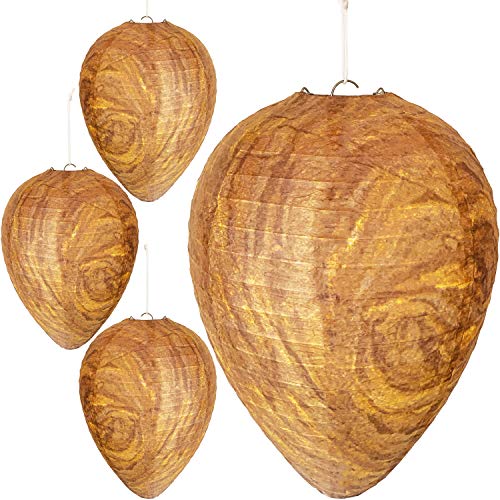 Similar to the patio eden, but comes in a four pack versus three pack. This brand makes the nests slightly bigger measuring 8.6 inches x 11.8 inches.

Overall, there aren't many differences between the two brands, but we did like the overall feedback from the customers who have used it.

Again, these decoy nests are not chemically driven so results will vary between customers. If you have a big wasp problem and need an extra nest decoy, we do like the Mood Lab Nest Decoy. 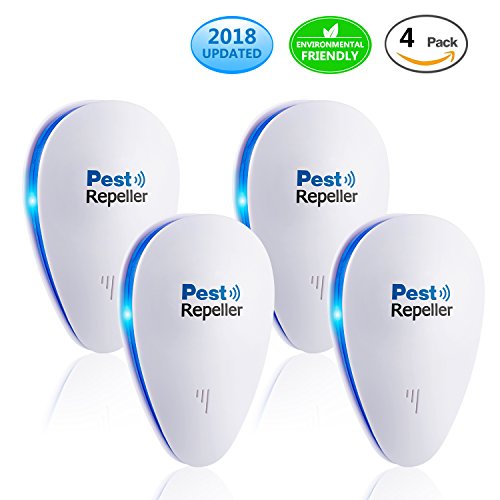 These pest repellers are a great option for those with large homes or office buildings and need to get rid of wasps without chemicals.

The SavHome Ultrasonic Pest Control Repeller (just like out overall top pick) can cover up to 1600 square feet with a single device. The reason we didn't rank these devices higher on our list, though, is because of the multipack option; most people simply don't need to purchase so many devices at once.

However, if you're working with a much larger infestation area, this is the option for you. For large homes and big office buildings, this should be your go-to device for a chemical-free wasp repellent.

This particular option is sold as a 4-pack, but there's also a 6-pack option available for sale as well.

No one wants wasps flying around the backyard, and no one wants to chase after them with a stream of chemicals, either.

We liked all the products on the list for different reasons, but our overall top pick appealed to us the most because of a few different factors.

As an alternative to an ultrasonic solution, we also like the wasp decoy approach. The Patio Eden Wasp Decoy is our top pick in that regard. Both options are worth exploring if you have a wasp problem.

Curious about other wasp related products? Check out our other detailed guides to help you deal with your pest problems.

We've partnered with Terminix to bring you the best prices on pest control. Click for a free quote.

Limited Time: Save $50 on a pest control plan!