Looking for the best ways to repel lizards around your home or yard? 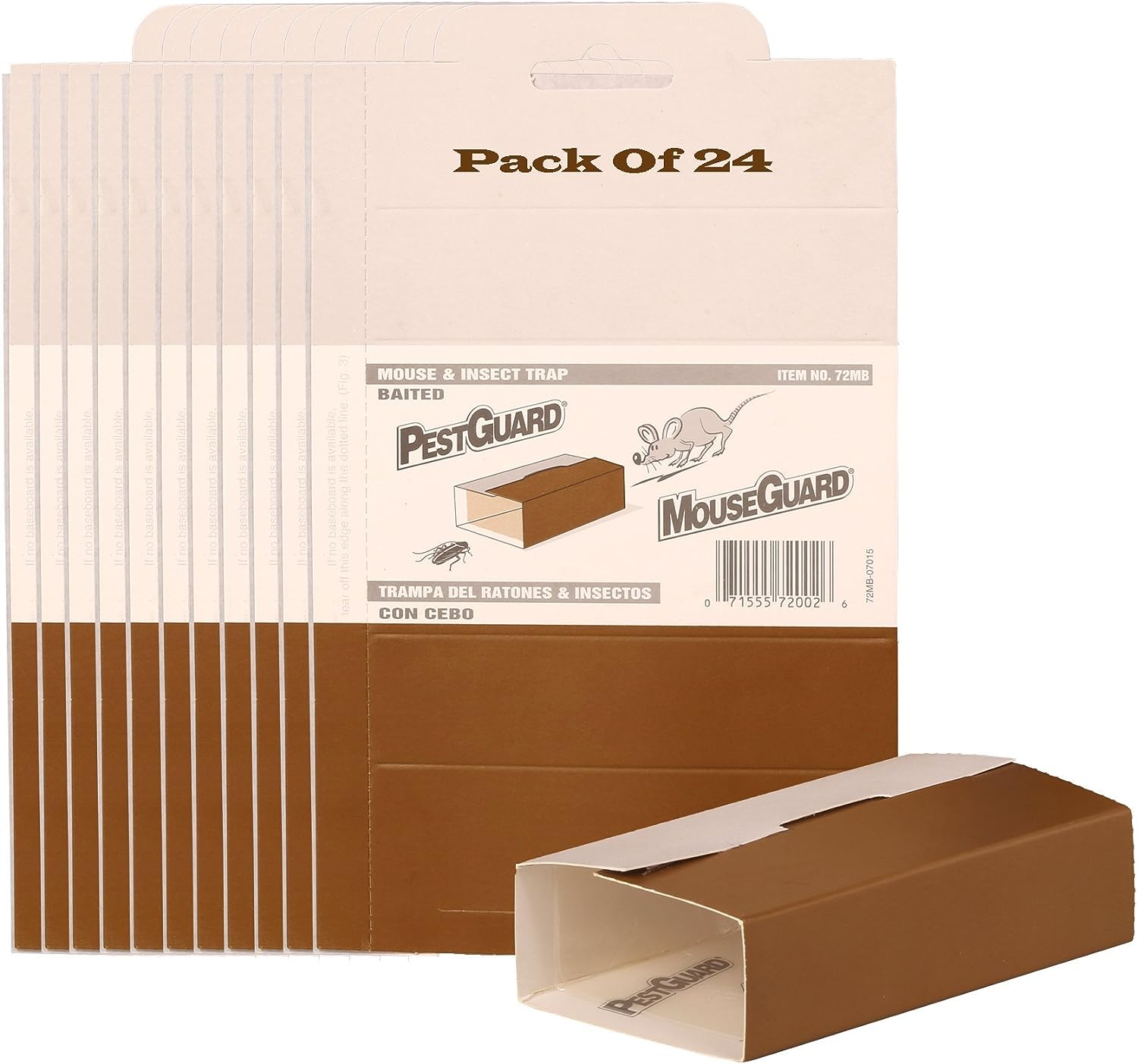 VIEW ON AMAZON
Lizard Sticky Glue Board Traps
Glue boards are non-toxic and easy to use. Best of all, once you catch a lizard or two on the trap, you don’t have to touch the lizards to get rid of them.
FEATURES

Glue boards may be not repellents per sé but they stop any lizard that comes in contact with them, every time.  The glue is too strong and lizards are too small and weak to pull themselves free.

Once they’re on it, they’re there to stay.

Glue boards are non-toxic and easy to use.  Best of all, once you catch a lizard or two on the trap, you don’t have to touch the lizards to get rid of them.

Pick up the trap by the non-sticky edges and throw it in the trash.

You can lay sticky glue board traps flat, or fold them along the creases to form a rectangular tunnel.  Put them out where the lizards are coming in or where you’ve seen them and your problems are over.

Check out our list below for a summary of our results. Keep on reading to learn more about lizard repellents.

What Are Repellents For Lizards?

While people generally think of repellents for insects, such as DEET or OFF for mosquitoes, repellents can also be used to drive away household lizards, geckos, snakes, and other reptiles.

Repellents for reptiles normally fall into the spatial repellent class.  That is, they release volatile chemicals into the air to cover a treated space.

Any lizard venturing into that space will encounter the repellent odors and/or chemicals and be repelled by them.

Cats are another type of “repellent” for lizards.  Cats are natural predators that often play with their prey (mice and lizards) before killing them.

You’ll feel sorry for the lizard in this video before it’s halfway done.

Unfortunately, cats are also lazy and undependable.  Sometimes they’ll ignore lizards because they’re enjoying themselves laying in the sun.

Although some reviews suggest getting a cat, we don’t have much confidence in them over the long run.

What Are The Different Types of Repellents For Lizards?

Repellents containing sulfur or naphthalene are chemical repellents.  Although sulfur (S) is a natural ingredient – it’s in Group 6A, the chalcogens on the Periodic Table of Elements – it’s still considered a chemical, although not a man-made one.

It’s a yellow non-metal, often known as brimstone.  Although it’s present in proteins and amino acids in our bodies, it’s also present in sulfuric acid in car batteries.  Many compounds with sulfur in them are harsh on the nose, including in lizards.

Naphthalene, of course, is the ingredient found in mothballs.  It volatilizes easily and when you smell it, you’re inhaling it.

It’s made from crude oil or coal tar and depending on the quantity inhaled or ingested, it can be fatal.

Essential oils fall into the class of non-chemical repellents, for both insects and lizards.  Careful observation over the centuries has revealed that lizards have a tendency to avoid certain plants.

Oils are then extracted from those plants to use as repellents.

Essential oils are usually extracted using one of three methods: steam distillation, expression, supercritical CO2 extraction.  These methods extract the oils without damaging them or creating chemical changes in them.

However, just because an ingredient is natural, doesn’t always mean its safe.  For example, water is perfectly safe – unless you’re drowning.

The same logic applies to non-chemical essential oils.  Be sure to use them according to the directions.

How Do Repellent For Lizards Work?

Repellents work by creating a constant cloud of unpleasant odors in the air.  When lizards encounter the odors, they either attack the sensitive tissues in their nostrils, throat, and lungs or make them think they’re encountering a plant they don’t like.

Except for glue boards, which work by catching lizards, repellents attempt to drive them away.  Be aware, however, that no repellent is 100% effective, no matter what the manufacturer would have you believe.

There will always be a certain percentage chance the lizard will simply ignore the odor and keep going anyway, usually because they’re hungry or thirsty and those primal drives overpower the repellent action of anything you put out.

Are Repellents For Lizards Dangerous To Pets or Children?

As we mentioned earlier, anything can be dangerous if you overdo it.  Granules containing sulfur and naphthalene can be hazardous if your children and/or pets pick them up off the ground and eat them in large enough quantities.

Even essential oils can cause allergic reactions in some people and animals. It’s rare but it does happen.

However, the chances of anything untoward happening due to using a lizard repellent is far less than the hysteria that can accompany finding a live lizard running loose around your house as the husband and wife in this video discovered.

Use the repellents and glue boards below according to the instructions that accompany them and you and your family should be safe.

Our Reviews Of The Best Repellents For Lizards

These 8" x 5" glue boards can be laid out flat on the floor or folded into a rectangular tube along the pre-made creases.  Simply peel off the plastic film covering the sticky glue-covered side of the trap and lay it out where you’ve been seeing lizards.

The best place to put them is near doors and windows, which inevitably have tiny cracks and crevices lizards can squeeze through to gain entrance to your house.

If you’re at all leery of chemicals or have allergies, these are the perfect solution.  They are also the single most effective method of catching lizards, and thus, keeping them out of your house that is on the market today. 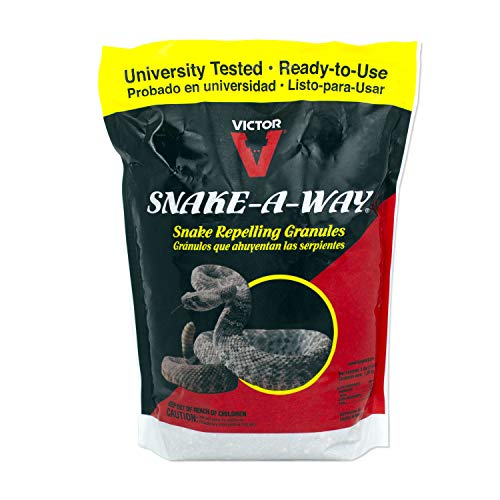 Lizards are reptiles just like snakes, so these snake repelling granules from Victor will do double duty for you.  The active ingredients are naphthalene (7%) and sulfur (28%) so there is a definite odor associated with using them.

The 4-pound bag of granules will cover up to half an acre and you will need to use a hand spreader to broadcast the granules.  Fill the spreader, set it to the middle setting, and walk at a normal walking speed, spreading the granules around the house.

This is an outside only method but it lasts for up to two months at a time.  In excessively rainy weather, you may have to retreat the area once a month until the weather changes. 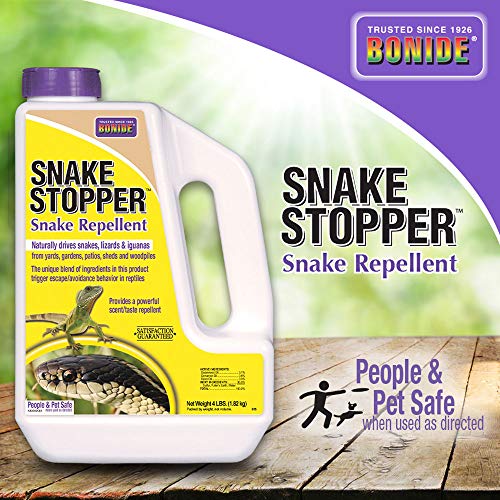 When reptiles encounter it, it triggers an escape and/or avoidance behavior in them and they try to get away from it.  It’s 100% biodegradable and can be used inside or out.

If you use it outside you can use the built-in shaker or pour it into a hand spreader.  It’s labeled for use indoors but it does contain some inert sulfur as a non-active ingredient so some people have complained about the “rotten egg” smell.

It is completely safe for your pets, children, flower gardens, lawn, or other plants.

These granules don’t have any sulfur or “rotten egg” smell to them at all because the active ingredients are all essential oils; cinnamon, geraniol, castor oil, peppermint, and clove.  It’s from Ortho so you know it’s coming from a reliable brand name manufacturer.

Lizards who encounter the combined odors will have their sense of smell overwhelmed by the power of the five oils.  They can’t smell their prey any more and they will move away from the area so they can hunt for food – insects.

This two-pound jug will cover about 1440 square feet using the built-in shaker top.  It will need to be reapplied every 30 days (15 in rainy weather) and is odor-free as far as people are concerned. 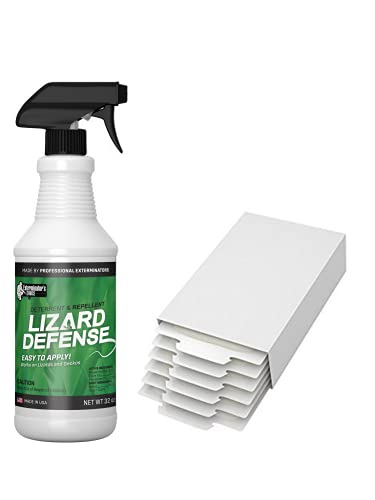 At first glance, this kit looks like the perfect way to get rid of lizards.  The active ingredients are peppermint, clove, cinnamon essential oils.

Combine that with glue boards and it should be a winning combination.

It comes is in a ready to use spray bottle and if you spray enough of the weak solution in the areas where lizards gain entry to your house, it will work, particularly when used in combination with the glue boards.

However, there are complaints the glue on the sticky boards is too weak and some lizards have been able to free themselves.  The kit works, but only if you over-apply the solution and use several traps at a time.

These 8" x 5" glue boards can be laid out flat on the floor or folded into a rectangular tube.

They’re easy to use; peel off the plastic film and put them where you’ve seen lizards scurrying around.

There aren’t any harsh chemicals, essentials oils someone might be allergic to, or offensive odors.

They can be placed anywhere you need them and when they catch a lizard, they are easy to dispose of.

We’ve used them ourselves and like them a lot.  You will too.

Curious about other mite related products? Check out our other detailed guides to help you deal with your pest problems.