Nuts, especially peanuts, are usually the top choice when you’re trapping squirrels, but that’s not your only option.

There are other baits that are blends of various nuts and seeds which are also highly rated for use as bait when you’re trapping squirrels.

You’ll need a trap, of course, and it has to be placed correctly, but getting rid of squirrels starts with getting the right bait.

Keep on reading and we’ll walk you through them. 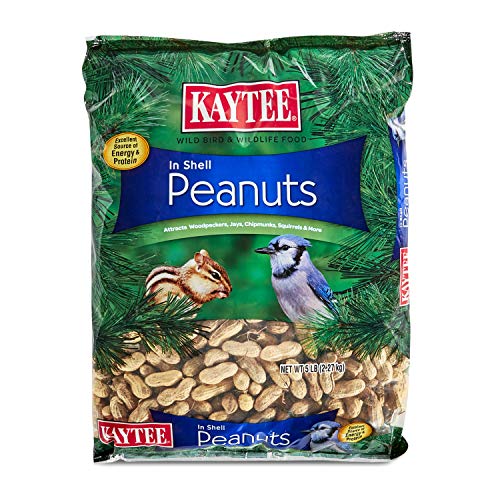 Kaytee Peanuts In the Shell

We picked Kaytee Peanuts In the Shell because it provides squirrels with the raw, uncooked, and unsalted peanuts they naturally prefer and are attracted to.

They want “raw” nuts fresh off the trees or just after they’ve fallen to the ground. This gives it to them.

These peanuts are also high in moisture content, which makes them doubly attractive to thirsty critters when it’s hot and that makes your squirrel trapping easier.

You’ll need to store it in a sealed container such as a 5-gallon bucket with a lid to keep insects out and moisture in.

Check out our list below for a summary of our results. Keep on reading to learn more about squirrel baits.

What Are Squirrel Baits?

The Department of Natural Resources in Michigan defines bait in terms of deer or elk, but their definition works in relation to squirrels too.

Bait is any substance intended for consumption that is made of grains, fruits, nuts, vegetables, or other food materials, which may lure, entice, or attract the target animal in order to hunt, trap, or kill them.

Squirrel baits are intended to trap a squirrel by luring it inside a trap which will then close and catch them when they attempt to take or eat the bait.

Read Also: What are the best squirrel traps?

Edible foods that are part of squirrels normal diet are concentrated to create an attractive food source.

The food source can then be used to trap squirrels. Used in this manner, nearly any food can be considered bait.

How Do Squirrel Baits Work?

Baits are presented as normal food stuffs the squirrels would eat anyway. They aren’t something new and exotic that might frighten squirrels away.

The trap might be new and exotic but the lure of “free food” overcomes any fear the squirrels might have.

Read Also: What's the best way to deter a squirrel?

The bait has to emit an odor the squirrels are accustomed to associate with food. Acorns, sunflower seeds, peanuts, corn, and other nuts are part of their normal diet so using them as bait is quite simple.

The squirrel smells and sees his normal food sitting in a pile waiting to be picked up and decides it’s easier to get his food there than scavenging all over the yard for it. It attracts to your traps from a distance.

Gray squirrels and red squirrels (also known as pine squirrels or chickarees) are the most common squirrels found in many parts of the country.

Anything in that list can easily be used as a bait to lure squirrels into a trap. Squirrels are known to live in forests or hard woodlands that are interspersed with clearings, much like a suburban neighborhood, and those are the foods they’re already looking for.

Any bait you put out in an area squirrels are already comfortable in, will be effective. Since they’re already living and scavenging in the area, they won’t be afraid of anything they find laying around.

How to Use a Squirrel Bait

The placement of the trap will depend on your observation of their habits and feeding patterns.

Putting the trap in an area they normally don’t travel through will be a waste of time and bait. It needs to be on or near their regular pathways.

A secondary consideration is covering the trap to conceal it’s rigid, boxy shape. Placing the trap under a hedge will accomplish this as well as putting the bait in a protected area where the squirrels will feel safe from aerial predators like hawks and owls.

Put the bait as far back in the trap as possible and put the trap alongside their normal pathways. If possible, put it in areas where it is covered. Do these simple things and your success rate will improve dramatically.

Are Squirrel Baits Safe Around My Pets and Children?

Yes, if, and only if, you don’t use poison baits. There are one or two poison squirrel baits available that use Diphacinone as the active ingredient to kill squirrels, but we don’t recommend using them.

Poison squirrel baits have to be put into child-resistant bait boxes but squirrels are hesitant to enter such enclosures.

Read Also: What are the top poisons for squirrels?

The bait cannot be left out where your children or pets might come into contact with it and eat it so this is a self-defeating strategy.

How Do You Find the Best Squirrel Bait?

Squirrels don’t like salty foods, so ordinary tabletop peanuts won’t attract them. Neither will roasted peanuts because of the lack of moisture in them.

The roasting process baked it all out of them. The same thing goes for sunflower seeds, corn, and other foods.

You need to find bait that is fresh. You should be able to detect a certain degree of moistness when you open the bag for the first time. If there’s not moisture, or it smells stale, the squirrels won’t be attracted to it.

Squirrels are equipped to with teeth and claws they use gnawing and scratching to strip off the outer layer of nuts to reach the meat inside them. Therefore, a peanut that is still in the shell will be highly attractive to them since it invites them to gnaw.

Kaytee Peanuts In the Shell​

People like salted, roasted peanuts but squirrels and chipmunks don’t. They much prefer “raw” nuts fresh off the trees or just after they’ve fallen to the ground.

This is a 5-pound bag of fresh peanuts that will be irresistible to those furry little pests.

These peanuts are high in moisture content (12%), which attracts thirsty critters and makes your squirrel trapping easier. This high moisture content makes this the best bait for your cage trap or live trap.

You’ll need to store it in a sealed container such as a 5-gallon bucket with a lid to keep insects out and moisture in. 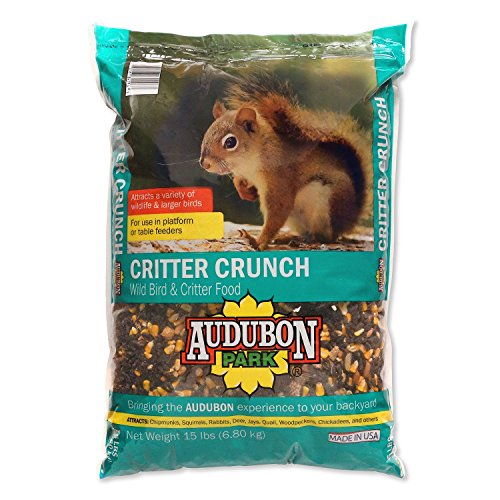 For wildlife removal or to take care of a squirrel problem, this is an excellent type of bait. It’s a mix of black oil sunflower seeds, corn, peanuts, and whole peanuts that will appeal to squirrels, chipmunks, groundhogs, and other small animals.

It’s specially blended to attract backyard wildlife. It can be used for baiting any animal trap or squirrel trap, or as bird seed in a bird feeder.

It comes in a 15-pound bag from a family-owned company right here in the United States.

The bag isn’t resealable, so you’ll need to get some 5-gallon buckets with lids to keep the bait from getting stale. 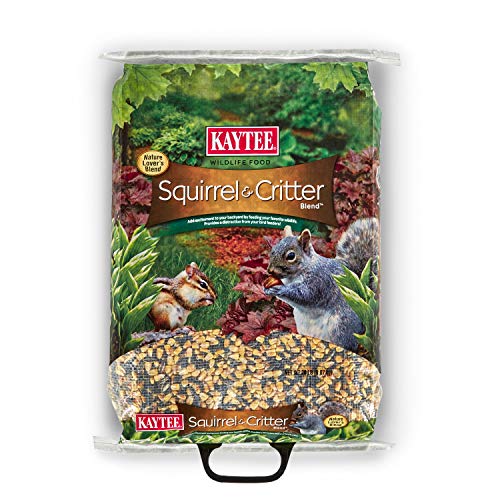 Kaytee makes our list a second time with their blend of corn, peanuts in the shell, and sunflower seeds.

It comes in a 10-pound bag that is barrier sealed at the factory right here in the United States. It stays fresh, from them to you.

This mixture will attract squirrels, chipmunks, rabbits, groundhogs, deer, and birds. Fresh food is the best squirrel bait to use in any type of trap you set out to catch squirrels.

You’ll need to get some buckets with lids to store it in once you’ve opened the bag, but since deer are also attracted to it, you can use it in place of deer corn when hunting season comes around. 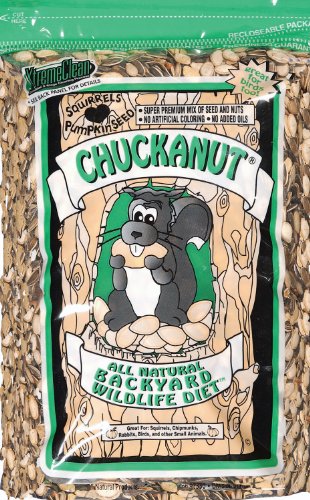 It’s got all the types of bait squirrels love. The only thing missing is acorns.

Pest control for squirrels doesn’t require a lot of squirrel bait so you may not need a 10 or 15 pound bag of it.

This 3-pound bag is just the right size for small scale squirrel control efforts or when you’ve only got a few of them hanging around.

Like many of the squirrel baits on our list, Chuck-A-Nut is manufactured right here in the United States. You won’t need a resealable container because the bag itself is resealable. 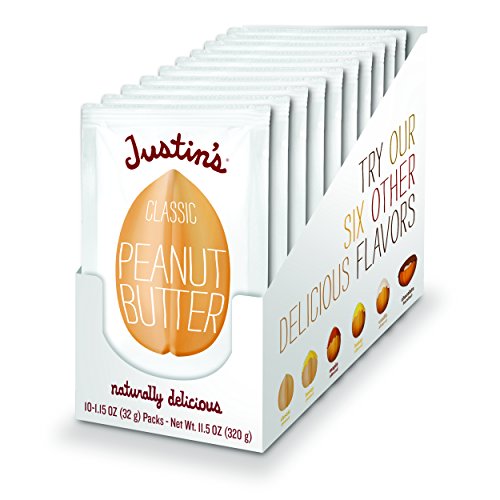 Squirrels love peanut butter and these individual squeeze packs from Justin’s each have 1.15-ounces each, just enough to put on a trap pan.

It’s the kind of bait that will lure them in and because it’s sticky, it won’t slide off the trigger mechanism in your trap.

Rather than dipping a spoon into the peanut butter jar you make your PB&J sandwiches from, use these individual squeeze packs to keep your food separate from your squirrel bait.

The convenience and ease of use of these squeeze packs is a big plus. You’ll probably have to use a separate pack for each squirrel trap though.

Our Top Pick: Kaytee Peanuts In the Shell

Squirrels like their nuts to be “raw”, fresh off the trees or just after they’ve fallen to the ground.

This 5-pound bag of fresh peanuts is uncooked, unsalted, and still in the shell, just the way they like it.

These peanuts are high in moisture content and that makes your squirrel trapping even easier.

You’ll need to store it in a sealed container to keep insects out, but this is the best bait for a squirrel trap you’ll be able to find.

Squirrel baits should never cost very much. You might even spend more on an airtight container to keep the bait in to maintain its freshness than on the bait itself.

Keep the bait fresh, put it in the back of the trap, then place the trap correctly. This is how to get rid of squirrels – and it works.

Curious about other squirrel related products? Check out our other detailed guides to help you deal with your pest problems.