Any encounter with a venomous snake, whether in your yard or out in the wild, can be potentially dangerous.

Although only about three people die per year in the United States from a snake bite, fear of snakes has led to the creation of snake handling tools.

A snake hook is a tool used most often by professionals. Snake tongs, also known as a snake stick, reptile grabber, or snake grabber, are the preferred tools of the layman.

This is because they give you more control over the snake. 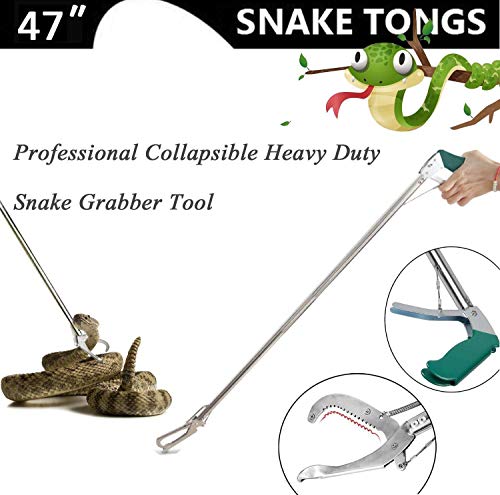 We chose Anrain even though it is a relative newcomer to the snake tong market because this tool passed every test with flying colors.

The wide jaws on the grabber allow you to handle any medium to large snake.

It’s made from stainless steel for strength and durability while the pistol grip handle is covered with green non-slip rubber for a secure grip.

The 47-inch snake tong keeps the snake safely away from you and the serrated jaws hold it firmly in place.

The stainless steel construction adds a bit of weight so you might have use to two hands to lift a large snake.

Check out our list below for a summary of our results. Keep on reading to learn more about snake tongs.

What Are Snake Tongs?

Snake tongs are a way of handling snakes, especially venomous snakes, from a safe distance without being bitten. All reptile snake tongs have the same basic design.

One end has a pistol grip connected to a wide jaw on the other end by a metal cable like a bicycle brake cable.

There are two main types of jaws; the Pillstrom jaws (sometimes spelled Pilstrom) and the gentle giant jaws, along with minor variations on each.

The gentle giant is also known as a wide jaw type. A few models have a spring-loaded jaw.

There are also collapsible snake tongs, heavy-duty and extra heavy-duty ones (usually with longer rods). The longer ones are typically the ones made from stainless steel.

How Do Snake Tongs Work?

A standard snake tong lets you put the jaws around the snake then squeeze the handle to close the jaws, holding the snake in place or lifting them off the ground. The jaws prevent the snake from moving.

You have to be careful using reptile snake tongs that have Pillstrom jaws. Pillstrom jaws are thin, with the upper jaw fitting down inside the lower jaw when they are fully closed. This puts shearing force on a snake’s delicate spine and can injure or kill them.

Contrary to popular belief, snakes prefer to escape rather than attack. These findings of non-aggression have been duplicated, but when provoked or stepped on, snakes will defend themselves by striking. For that reason alone, you’ll want them gone.

Read Also: What are the best repellents for snakes?

Snake tongs provide a way to physically capture a snake without exposing yourself to the possibility of getting bitten in the process. A snake’s striking distance is about half of its body length and these tongs keep you outside of that distance.

Professional snake handlers use snake tongs and snake hooks on a regular basis to capture and transport snakes from one location to another. There is no safer or more effective way to safely remove snakes from your property.

How To Use Snake Tongs?

Snakes have a long flexible spine and around 300 ribs depending on the species. Be careful with the tongs. If you lift a snake just behind the head, it will put too much pressure on their spine and could result in killing them.

Instead, aim for the front third of the snake’s body. This distributes their weight more evenly but still keeps their head far enough from your hand that they can’t bite you.

Their spine is still easily broken though, so try to keep part of their body on the ground.

Use slow, steady movements when you extend the snake tongs. Fast, abrupt movements will startle them and they’ll retaliate by striking.

They’ll also react violently when the jaws clamp down on them, so don’t let yourself be startled when it happens.

Read Also: What are the top traps for snakes?

Snakes are fond of hiding under bushes or in holes in the ground. A longer set of snake tongs would be advisable in those situations to give yourself some extra distance.

Are Snake Tongs Safe Around My Pets and Children?

If the tongs are just lying there, it’s perfectly safe. However, children like to pick things up and swing them at each other.

Since snake tongs are made from metal, they could cause some serious injuries if they start swinging at each other.

Treat snake tongs the same way you’d treat a baseball bat or tire iron. Keep them out of reach of your kids until they’re old enough to acquire some maturity.

How Do You Find the Best Snake Tongs?

Snake tongs are metal. All else being equal, aluminum is lighter and easier to wield than stainless steel.

Stainless steel tubing is much stronger and won’t bend or break the way aluminum often does.

Although Pillstrom jaws are more dangerous to snakes than flat or gentle giant jaws, most manufacturers have shifted to Pillstrom jaws.

Unless you’re willing to spend a lot of extra money, go ahead and get tongs with Pillstrom jaws.

Read Also: What snake proof boots are worth buying?

Finally, the length should be a consideration. Longer tongs create more distance between you and the snake, but they’re also harder to maneuver with a snake’s weight out there on the end of the stick.

Except in extraordinary circumstances, 47″ should be fine.

Anrain is a relative newcomer to the snake tong market but this tool passed every test with flying colors.

The wide jaws on the grabber ensure you can handle any medium to large snake. The 47-inch snake tong keeps the snake safely away from you.

It’s made from stainless steel for strength and durability while the pistol grip handle is covered with green non-slip rubber for a secure grip.

The serrated edges on the Pillstrom jaws prevent the snake from escaping or turning to attack.

The spring-loaded jaws ensure they’ll open as soon as you release the trigger. The stainless steel construction adds a bit of weight so you might have to use two hands to lift a large snake. 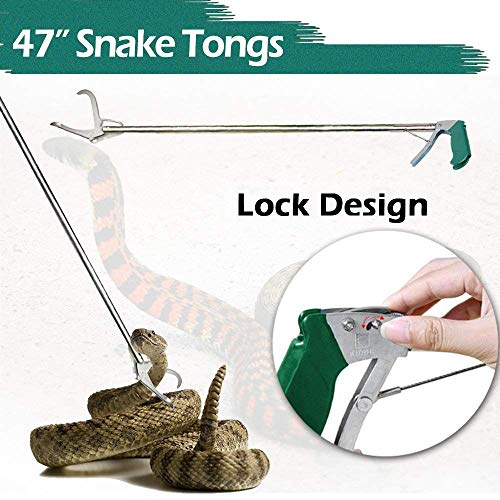 This popular tool is made of aluminum alloy in a 19mm tube with a green rubberized, non-slip grip so you don’t drop it (and the snake!) when you’re using it. It’s safe, lightweight, and easy to use.

It has a locking mechanism so you don’t have to maintain pressure on the grip to keep the Pillstrom jaws closed but there have been complaints the lock doesn’t always work.

The spring-loaded jaws open as soon as you release the trigger.

The serrated edges on the jaws hold snakes firmly in place and the aluminum construction ensures it is rust-proof. A repair kit is included. 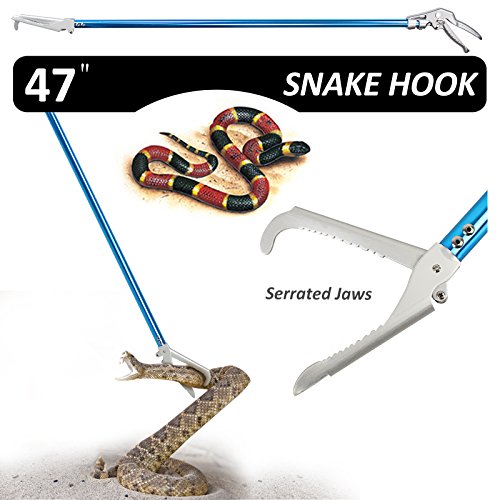 This snake grabber has a 22mm aluminum alloy rod that is powder-coated blue for an elegant appearance.

The Pillstrom jaws are wide and gently serrated on the edges to hold snakes firmly in place. The pistol grip is ergonomically designed stainless steel.

The cable stays hidden inside the tube so it doesn’t get snagged on limbs and bushes. The jaws are spring-loaded for a quick release.

There is a locking mechanism to hold the jaws in place but it only works when there is no snake in the jaws.

It’s lightweight and comes with a 2-year warranty, but the handle doesn’t have a non-slip grip on it. 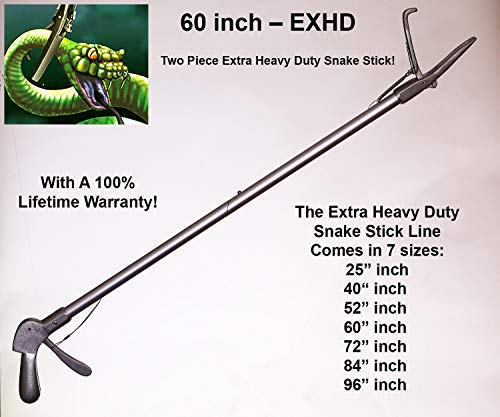 When you need some extra length to keep an aggressive snake at bay, this is the snake catcher for you. It’s also collapsible for easy storage.

The stainless steel tubing, handle, and Pillstrom jaws bring this tool in at a hefty three pounds.

When you add the weight of a 3-4 pound rattlesnake at the end of 60 inches, you may have to use both hands to keep it under control.

The pistol grip is well made but lacking a rubberized non-slip grip. There’s no locking mechanism either.

These are heavy-duty snake tongs but the price is more than twice what most tongs cost, so make sure you really need the extra length. 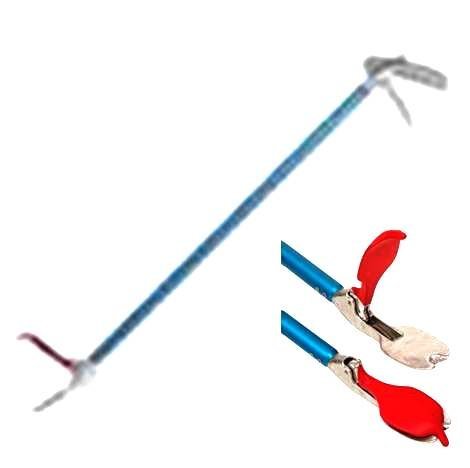 If you want to avoid any chance of harming the snakes you catch with a reptile tong, this tong from Midwest has extra-wide, flat jaws.

There’s no shearing action to harm a snake’s delicate spine when you use this one.

The top jaw is triple-coated with rubber to create friction to hold the snake in place while the bottom jaws are too smooth for the snake to get any traction.

It won’t harm snake but it’s the most expensive snake tong we reviewed.

It’s made of aircraft-grade aluminum powder-coated blue for an elegant finish. The cable is hidden inside to avoid snagging and even with the 52″ length, the whole thing only weighs in at one pound.

This tool from Anrain passed every test with flying colors. The 47-inch snake tong keeps the snake safely away from you and the wide jaws on the grabber ensure you can handle any size snake.

It’s made from stainless steel for strength and the pistol grip handle is covered with green non-slip rubber for a secure grip.

The serrated edges on the jaws prevent the snake from escaping or turning to attack.

Snake tongs are the kind of tool you hope you never have to use but they’re sure handy when you do. If you suspect there are venomous snakes in your area, you should have a set of snake tongs around “just in case.”

If you think of snake tongs as a kind of insurance, it’ll be one of the best one-time purchases you ever made.

Curious about other snake related products? Check out our other detailed guides to help you deal with your pest problems.

Any encounter with a venomous snake, whether in your yard or out in the wild, can be potentially dangerous. Although[...]
Read More
Snakes have had a bad rap since the Garden of Eden. No one wants to find this creepy critter in[...]
Read More
Cottonmouth snakes are aggressive, poisonous, and they look like they're munching on a ball of cotton all the time. This[...]
Read More
​Of more than 3,000 species of snakes that slither across the globe, only ​ around 200 have been classified to[...]
Read More