Permethrin is one of the oldest, most popular, and well-known insecticides in the world. Permethrin is formulated into creams, lotions, powders, and sprays.

Each formulation is different though. Some include a synergist (a family of chemicals that improve the killing efficiency of the main chemical) and some don’t.

Other additives can increase its sticking power or extend its effective life span. 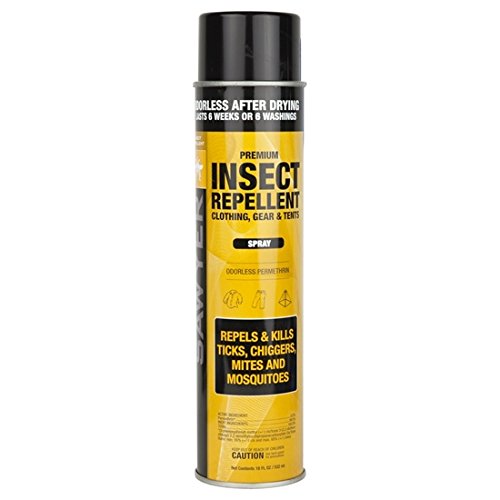 VIEW ON AMAZON
Sawyer Products Premium Permethrin Clothing Insect Repellent – Aerosol
It won’t damage clothing but will act as an insect repellent to keep all kinds of insects away.
FEATURES

Because of these slight, yet important distinctions, it can become confusing trying to figure out which one is best which is why we've created this Permethrin spray review guide for you!

If you're short on time, you can click here to jump straight to our overall #1 pick for the best permethrin spray on the market. 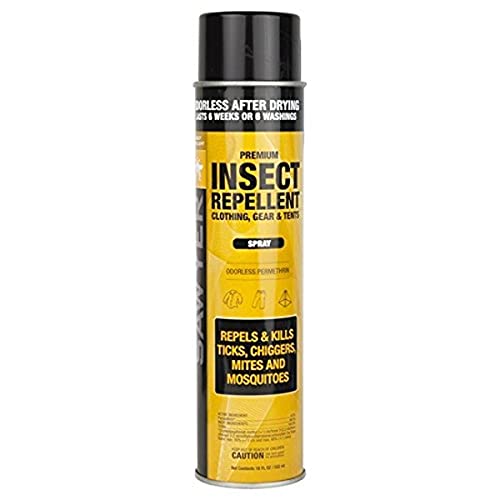 Unlike DEET or Picaridin, which are applied to your skin, this permethrin spray is meant to be sprayed on your clothes. Once the treated clothes have dried, the permethrin bonds with the fabric for up to six weeks or six washings.

It won’t damage clothing but will act as an insect repellent to keep all kinds of insects away. Sawyer permethrin products are odorless and this aerosol spray won’t stain your clothes or leave them feeling greasy.

There are over 400 different compounds listed and registered in the United States that can be used as insecticides. Permethrin is one of the most popular of them.

Permethrin is a synthetic version of pyrethrum, a dry powder made from the crushed petals of the chrysanthemum flower, which is mainly grown in Kenya. Botanical versions of pyrethrum are called pyrethrins.

The Environmental Protection Agency (EPA) lists over 3,500 registered products that use pyrethrum (pyrethrins) or pyrethroids as the active ingredient. Along with permethrin are other related insecticides. Below is a partial list.

Along with permethrin, these active ingredients, in various formulations, constitute the bulk of the insecticides used in the 3,500 products listed by the EPA.

How Does Permethrin Work?

Permethrin attacks the central nervous system of insects, specifically, the sodium channels. This interferes with the functions of the neurons and causes muscle spasms, leading to paralysis and death.

It can enter the body through dermal contact with exposed skin or ingesting it by eating it. It also acts as a repellent.

Repellents interfere with an insect’s senses, including taste and smell. Their eyesight is so poor that cutting off their other senses effectively renders them blind. Then they tend to avoid areas where they can’t see, smell, or taste the world around them.

Yes. Permethrin has a long track record of success in the United States and around the world. It’s what is called a broad-spectrum insecticide, meaning it kills many different insects.

How To Use A Permethrin Spray

Hold the spray nozzle at least six to 18 inches away from the surface or fabric you’re spraying. Use a smooth motion back and forth across the surface until it is damp to the touch, but not dripping wet.

Check out the video below for more information on how to properly apply permethrin spray:

Are Permethrin Sprays Safe Around My Pets And Children?

It depends on how old your children are.

Small children, and most pets, are physically smaller than adults. This means they have a greater skin surface to weight ratio. Insecticides can penetrate human skin, so the more skin per body weight, the greater the amount of pesticide that enters their body relative to their weight.

Infants and small children have higher respiratory rates than adults, resulting in them breathing in more insecticidal fumes than adults. Additionally, children eat and drink more relative to their body weight than adults.

Finally, infants and young children spend much of their time crawling around on the floor, which is where you’re most likely to spray with permethrin insecticides. The same thing goes for pets.

This product is not safe for pets and young children, as they are more susceptible to the toxic effects of pesticides.

Infants, small children, and pets are more susceptible to toxic effects from pesticides than adults so they should be kept out of treated areas for several hours after spraying.

The CDC recommends a variety of active ingredients as a mosquito repellent and/or tick repellent to protect you and your family from the Zika virus, rocky mountain spotted fever, Lyme disease, and scabies, among other diseases.

They recommend you use the following as your first line of defense:

Unlike DEET or Picaridin, which are formulated to be applied to your exposed skin, this Sawyer permethrin spray, in an aerosol can, is meant to be sprayed on your clothes.

Once the treated clothes have dried, the permethrin bonds with the fabric for up to six weeks or six washings, whichever comes first. It won’t damage clothing but will act as an insect repellent to keep chiggers, mosquitoes, bedbugs, black flies, ticks and other kinds of insects away. 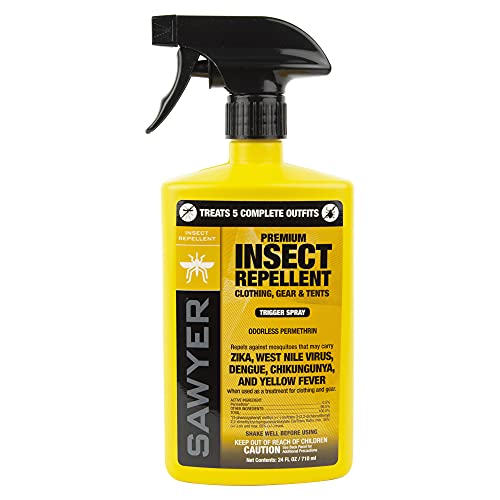 This is the same product as above, but in a pump spray instead of an aerosol. It can be sprayed on your clothes, outdoor gear, sleeping bags, hammocks, and folding chairs. A single application will last up to six weeks or six washings.

Unlike citronella and other essential oils, it won’t stain your clothes or leave a greasy residue behind. It’s also odorless after it dries, making it ideal for hunting when you don’t want your scent to give you away.

This bug spray is an excellent insect repellent for disease control against mosquito and tick bites. The trigger spray might tire your hand from repetitive squeezing if you’re protecting a lot of clothing. 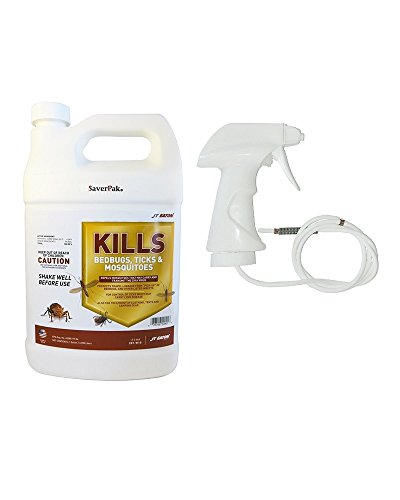 This permethrin clothing and gear treatment will protect you against chiggers, mosquitoes, and ticks as well as 100 percent DEET. It won’t stain or damage clothing, tents, backpacks, plastics, or other outdoor gear.

This one-gallon jug is a ready-to-use permethrin insect repellent with a trigger spray on it, along with a heavy-duty carrying handle. Once applied, it takes about two hours to dry. After that, it will last for about six weeks or six washings, whichever comes first.

It is also registered with the EPA for use as a regular pesticide, to treat cracks and crevices in your house, around windows and doors for a broad variety of insects, from ants to spiders to yellow jackets and everything in between. 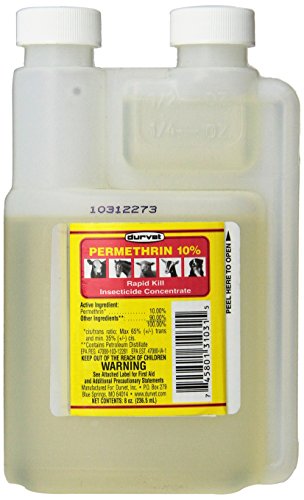 While many Permethrin products are not for direct application to people or animals, this particular product is designed not for people but farmers and rural animal caretakers.

Its specialized formula allows them to have a means of ridding their furry friends of the pests that swarm them such as fleas, lice, and ticks.

Besides being approved for use on livestock and dogs directly, its users will often find use for it when a shed or barn needs to be treated with something that isn’t dangerous to the animals that inhabit it.

Or you can even use it in your home if you like, as long as you don’t apply it directly to people or the places that they are going to be in contact with on a regular basis such as beds, couches, and pillows.

This pesticide is a professional strength; because of that, a little bit goes a long way. One quart of Duvets 10% Permethrin will produce twenty-five gallons of product.

It also has residual effects up to 28 days after application meaning that the target pests will die off even after they hatch from their eggs. 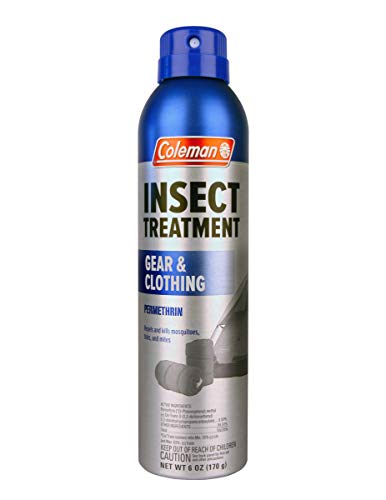 Coleman, a dependable name in the camping industry, offers a bug repellent you can spray directly onto clothing and gear. It contains permethrin which is one of the best agents for keeping ticks and mosquitos away.

Spray directly onto shirts, pants, jackets, backpacks, and hiking gear. Allow two to four hours to dry. However, it should not be applied directly to the skin.

Coleman Gear and Clothing Insect Repellent will last up to two weeks. And it won't have any effect on waterproofing.

This long-lasting EPA-approved insect repellent is ideal for hiking, camping, or long wilderness expeditions. The best thing is, there are no noxious odors.

This Sawyer permethrin spray is meant to be sprayed directly on your clothes instead of your skin. Once the clothes are dry, you’ll be protected for up to six weeks or six washings, whichever comes first.

It won’t damage your clothing, is odorless, won’t stain your clothes, or leave them feeling greasy.

Grab the aerosol spray can or the pump spray which many customers now prefer!

Sawyer products are the quickest and easiest permethrin spray for the non-professional to use to protect your and your family from marauding insects. Permethrin is an excellent repellent and Sawyer has packaged it nicely for your use.

If you want a different kind of insect shield, there are several professional permethrin products to choose from.

Curious about other pesticide and herbicide products? Check out our other detailed guides to help you deal with your pest problems.

Cleaning your home diligently is not a guarantee that you will never have a run-in with a household pest at[...]
Read More
Looking for the best respirators money can buy? From pesticides, to spray painting, woodworking, and even mold, we picked the[...]
Read More
The term "boric acid" may sound more like a horrifying ingredient in a laboratory science experiment......but did you know you[...]
Read More
A quick scan of the active ingredients on most insecticides will reveal a chemical which sounds like gibberish to most[...]
Read More