Are you looking for the best mouse poison?  Then you've come to the right place. 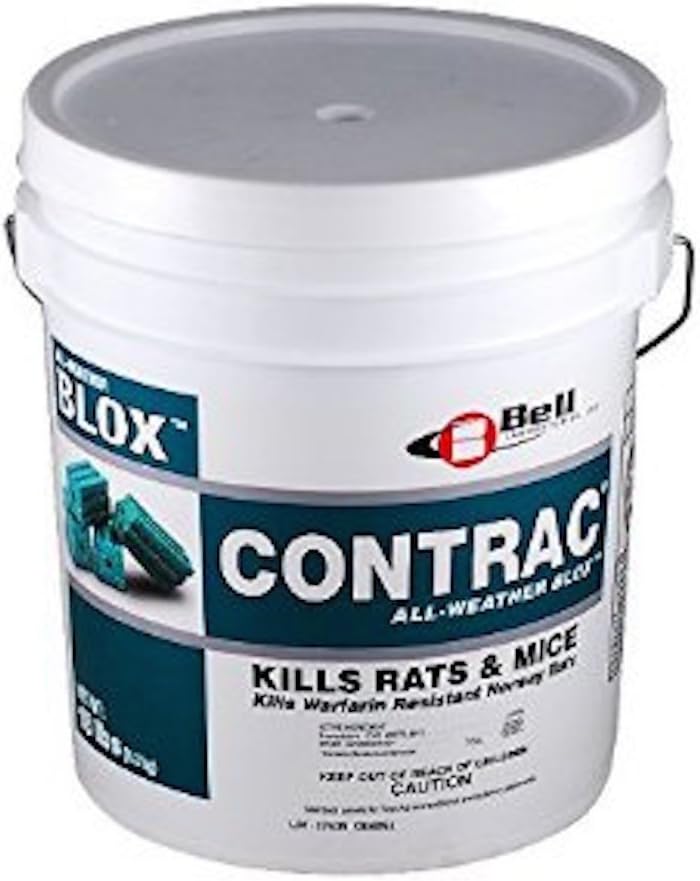 VIEW ON AMAZON
Contrac Blox
It can be used inside and outside, has a long lifespan, and has good weather resistance.
FEATURES

Of all the mouse poisons we researched and reviewed, our top pick goes to Contrac Blox.

In large part because of personal experience we've had using it ourselves.  Also, it has an industry proven track record of success.  The active ingredient, bromadiolone at 0.005%, delivers a lethal dose in only a single feeding.

It can be used inside and outside, has a long lifespan, and has good weather resistance.

Check out our list below for a summary of our results. Keep on reading to learn more about mouse poisons.

What Are Mouse Poisons?

They don't really make the blood thinner, of course, it's simply an expression. An anticoagulant is a compound that doesn't let blood clots form in the blood.

The animal starts bleeding internally and it won't stop.  Eventually, the animal bleeds to death. There are four main active ingredients used as anticoagulants in mouse poison.

Warfarin was an early anticoagulant used to control mice.

It was introduced in the early 1940's and is now known as a first-generation anticoagulant.  It was heavily overused, giving rise to warfarin-resistant rats.

Warfarin isn't used in rodenticides anymore.  Occasionally it is still used as a medical treatment for some people, but mainly it has fallen out of general use.

A second-generation anticoagulant, Bromadiolone is used in rodenticides to kill rats, mice, and general rodents.  It is an odorless powder, usually white to yellow in color.

It works by preventing the body from recycling vitamin K, which is needed to clot the blood.  Once mice run out of vitamin K they will take several days to bleed to death internally.

The antidote for bromadiolone poisoning is large does of vitamin K1.  If you suspect you've been exposed to Bromadiolone or any other anticoagulant, contact your doctor at once.

Brodifacoum is another anticoagulant used in mouse poison.  Like Bromadiolone, it inhibits the body from being able to recycle vitamin K.  It has a slightly different mode of action than Bromadiolone, but it's more a matter of degree rather than kind.

This is also an anticoagulant that is a vitamin K antagonist.  It was invented by Bell Labs in 1990.  It is generally considered to be weaker than the others because it is a “multiple feeding” mouse poison.

The following video will tell you more about mouse poisons.

What Does Single Feed and Multiple Feed Mouse Poison Mean?

This refers to the number of times a mouse has to feed on the bait in order for it to take effect.

In pest control jargon a bait is considered “hot” if it will kill the mice in just one feeding, otherwise, it is just an ordinary bait, AKA, multiple feed, which means the animal has to feed off of it several times in order to ingest a lethal dose.

This is highly problematic when it comes to mice.  Mice are so small they only need a 1/10-ounce of food per day.

One to two tiny nibbles usually isn't enough to kill them.  All it does is make them sick, which teaches them to avoid the bait in the future.

Are Mouse Poisons Safe to Use Around Children and Pets?

Keep them out of reach of pets and children at all times.  Baits should always be used in conjunction with bait boxes so pets and children can't get to it. Leaving rodenticides out in the open is A) dangerous and B) a lawsuit waiting to happen.

Because of the danger to children and pets, rodenticides should always be used in conjunction with tamper resistant bait boxes.

Read Also: What are the best mouse baits?

Be sure you read the label on any rodenticide before using it.  In the pest control industry, the label is the law.

This is because the contents of the label are mandated by the EPA as well as various state agencies.  Using rodenticides “off-label” is a criminal offense.

Because rodenticides can cause serious harm to people, the EPA is especially vigilant about enforcing the criminal aspects of the law regarding these products.

As a quick recap, here are the 5 mouse poisons we looked at.  Our #1 pick goes to the Contrac Blox.  Be sure to take a look at the JT Eaton Bait Block because blah blah blah.

The active ingredient in Contrac, from Bell Labs, is bromadiolone at 0.005%, making it a single feed rodenticide.  It kills Warfarin resistant mice and rats.  It is weather resistant so it can be used inside and out.

The blocks are created with a hold in the middle so they can be mounted on slender rods inside bait boxes.  This will keep rats and mice from trying to drag the bait back to their lair.

Change the bait every 40-60 days in the winter if it hasn't been eaten. During the hot summer months, you'll need to change it more often.  It comes in an 18-lb bucket, so don't be hesitate to use it. 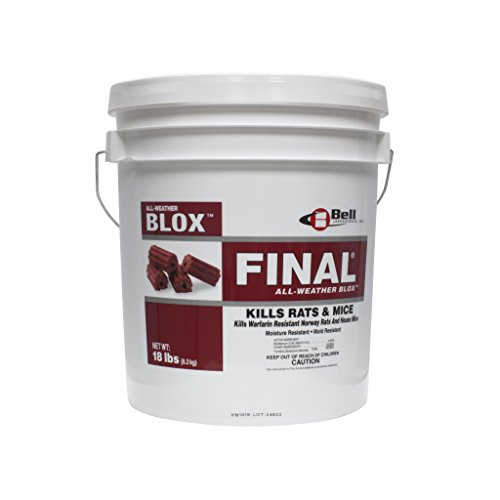 Also from Bell Labs, the active ingredient in Final Blox is brodifacoum at 0.005% so it's a single feeding rodenticide that will kill mice after only one little nibble.  It's slightly less expensive than our top pick, but a little bit slower too.

Always use it in conjunction with bait boxes to keep children and pets from eating it.  It can be used inside or outside. 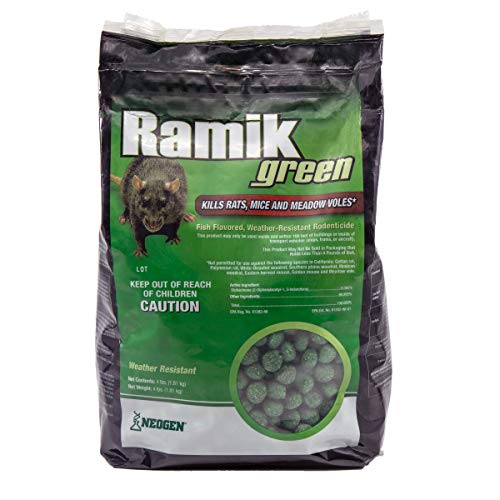 Neogen created this pelletized rodenticide for multi purpose indoor and outdoor use. Their all weather composition makes them a versatile option for your rodent problem.

Many customer reported the mice loving taking these pellets and storing for later. So it may take a while before the mice ingest these pellets, meaning results may not occur for a week or more.

These are extremely easy to use; just toss them into an attic, closet, tool shed, or any other enclosed area where children and pets can't get to them and your job is done. 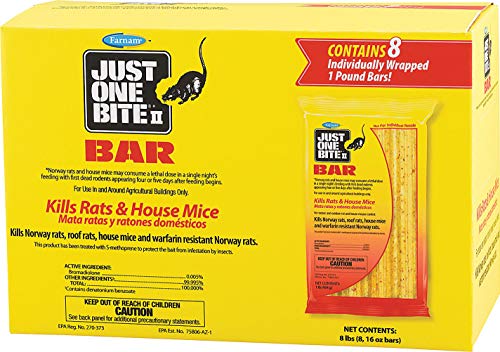 These paper encased place packs, from Farnan, come 5 to a package for those times when you only need a small amount of rodenticide and don't want to spend $80-$90 on a bucket of bait.

The active ingredient is bromadiolone at 0.005%, so it's a strong, single feeding bait.  It can easily be used in attics, basements, crawl spaces, tool sheds, well houses, and other enclosed areas where children and pets can reach the packets.

It has good weather resistance and will last for a good couple of months before you need to replace it.

These peanut butter flavored bait blocks, from J.T. Eaton, use diphacinone at 5% as the active ingredient.  This is a multiple feed bait so it will take longer to eliminate mice and rats, but it is significantly less expensive, so it's a good trade-off.

The peanut butter flavor is a nice touch since that's a food mice and rats have a known fondness for.

It has good weather resistance, and like all bait blocks, should be used with a bait box to prevent children and pets from gaining access to it.

(If we sound like a broken record on the pets and children issue, it's because it's so important.)

In cool dry weather, the bait will last for up to 60 days.  In hot or wet weather, it will have to be changed more often.

There are a lot of mouse poisons on the market.

All of them will get the job done to one degree or another.

We've used it in the field ourselves and had good success with it over many years.

It has a proven track record of effectiveness and ease of use.

A close second is Final Blox which uses a slightly different active ingredient but is otherwise a proven competitor.

Other Rat and Mouse Product Reviews

Curious about other rat and mouse related products? Check out our other detailed guides to help you deal with your pest problems.

Looking for the top rat killers that are pet friendly?Perfect! In this Pest Strategies guide you’ll learn:What constitutes a "pet[...]
Read More
No one wants mice living in their home but perhaps you don’t want to kill them either; certainly not in[...]
Read More
When rats try to invade your home, garage, barn, greenhouse, pastures, warehouses, or businesses, you need to put out rat[...]
Read More
If you’ve got an infestation of mice and you want the best mouse trap to get rid of them, you[...]
Read More