Looking for an IGR to stop fleas from reproducing in your home?

Perfect! In this Pest Strategies guide you’ll learn the following: 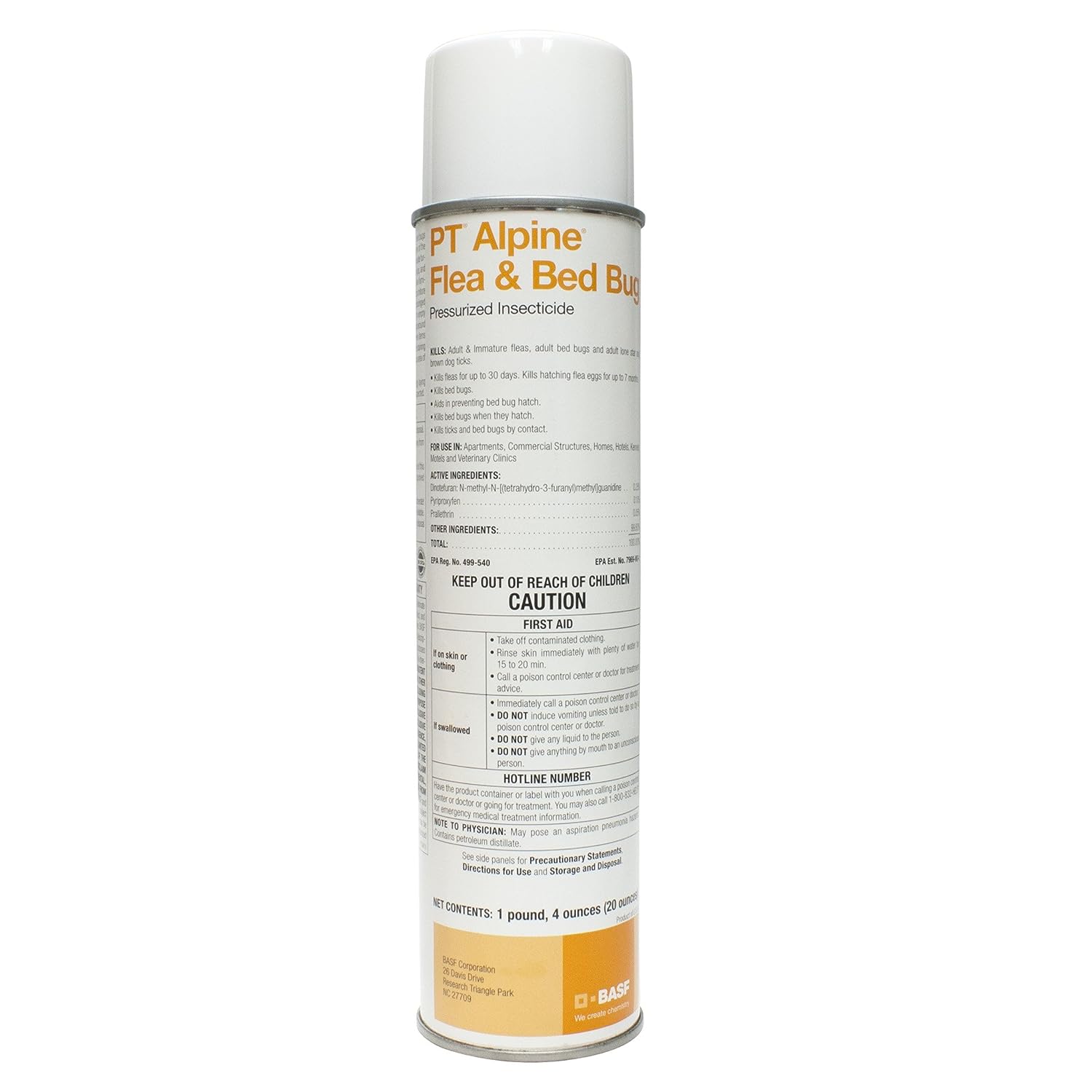 VIEW ON AMAZON
PT Alpine Flea Insecticide with IGR
The best thing about PT Alpine is also the most obvious, it’s an aerosol that is quick and easy to use without any mixing or measuring required. Pop off the lid, give it a shake, and you’re ready to start spraying those pesky fleas.
FEATURES 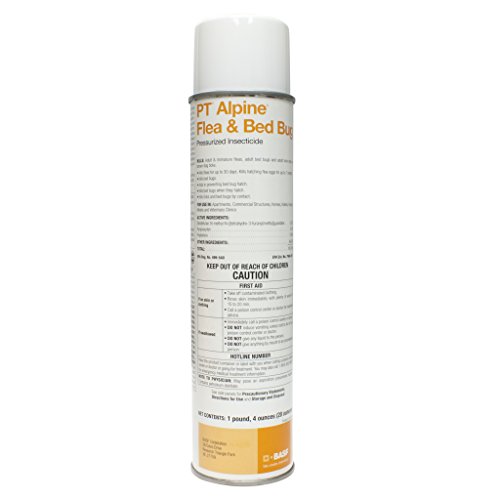 The best thing about PT Alpine is also the most obvious, it’s an aerosol that is quick and easy to use without any mixing or measuring required. Pop off the lid, give it a shake, and you’re ready to start spraying those pesky fleas.

The second best thing about it is that it contains two active ingredients, one to kill the fleas and the IGR.

It also contains a synergist to accelerate the action of the other chemicals. It is literally an all-in-one solution to your flea infestation problems.

When you’re done, the fleas are dead, those that hatch afterward can’t lay eggs, and the residual impact lasts for several months. Best of all, when the can is empty, just throw it away; no messy clean up required.

Check out our list below for a summary of our results. Keep on reading to learn more about IGR for fleas.

What Are IGRs For Fleas?

In layman’s terms, Insect Growth Regulators, IGRs, are birth control for bugs. That’s a vast oversimplification that completely ignores how IGRs actually work, but it is a perfectly accurate way to describe the results of using an IGR.

They aren’t fatal for adult insects. Instead, they prevent reproduction in the next generation in one of several ways. In order to use an IGR correctly, you’ll need to combine it with an insecticide to kill the adult fleas.

If you don’t mix a regular pesticide with the IGR, or use it in combination with the IGR, the adults will continue laying eggs, which, because they were laid after the IGR was sprayed, will be less affected by it.

Read Also: What are the best flea traps on the market today?

What Are The Different Types of IGRs For Fleas?

IGRs are divided primarily by the active ingredient, secondarily by added chemicals such as synergists and knockdowns.

This IGR has to be touched and/or eaten by insects. It’s often used directly on many pets for flea and tick control, so it will be safe to use around your own pets.

It has a good residual impact indoors but it breaks down quickly in direct sunlight.

It comes in two different forms, s-methoprene and r-methoprene.

S-methoprene is the one that mimics juvenile growth hormones in insects so pay close attention to the label when you’re buying an IGR.

It works by inhibiting the growth of young insects and often results in them looking strangely deformed.

However, since the label is the law so we won’t list this one for use against fleas.

This is an insecticide in the neonicotinoid class. They are “new nicotine-like” insecticides that attack the receptors in nerve synapses in the central nervous system of many insects.

This isn’t an IGR. It’s an insecticide often used in conjunction with them.

It has a fast knockdown on adult fleas and a good residual impact, lasting up to three months in some cases.

This is another insecticide that is often used in combination with IGRs. It is a member of the pyrethroid family of pesticides.

Read Also: Our recommendations for flea sprays that actually work

How Do IGRs For Fleas Work?

An IGR is an insecticide that mimics the juvenile growth hormones in young insects, thus disrupting the way they grow and reproduce. They work on many different insects including cockroaches, mosquitoes, bed bugs, and fleas.

Insects trapped inside their old skin will often appear warped or mutated as their body tries to grow in the old skin. Eventually, they will be squeezed to death due to the inability to molt. Pest control technicians sometimes refer to these insects as being “i-grr-ed”.

Except for PT Alpine, you’ll have to do some tank mixing in order to use IGRs. This video demonstrates the normal method for mixing pesticides in a 1-gallon sprayer.

Are IGRs For Fleas Dangerous To Pets or Children?

IGRs affect hormones that are present in insects, not mammals, so the active ingredients, as such, aren’t dangerous to pets and children at all. However, some of the so-called inert ingredients may be a different story.

All pesticides have some level of toxicity associated with them and children, due to their small size and immature bodies, are more susceptible to harm than adults. They eat and drink more due to their relative body weight, which can lead to a higher amount of pesticide residue per pound in their bodies.

Infants in particular will be more exposed to any pesticide as they crawl around, put things in their mouths, and explore everything they encounter with their hands and feet.

Always keep infants out of treated areas for at least 1-2 days until the chemicals are completely dry and the air is clear of fumes.

Read Also: How do you get rid of fleas in your carpet?

Our Reviews Of The Best IGRs For Fleas

This pet-safe aerosol is perfect for homeowners who don’t want to be bothered with mixing chemicals. It contains two main active ingredients, plus a third one that acts as a synergist.

The combined result is an easy to use, all-in-one approach to killing fleas.

One 20-ounce can will treat 2,625 square feet. You need to hold the can upside-down when spraying. Cover every inch of the house so the fleas don’t have anywhere to hide.

Make sure you get all the cracks and crevices along the baseboards, doors, and windows.

Since you also need to treat all your fabric furniture, drapes, and beds, one aerosol can may not extend as far as it claims. You’ll probably have to get two of them to completely cover the entire house. 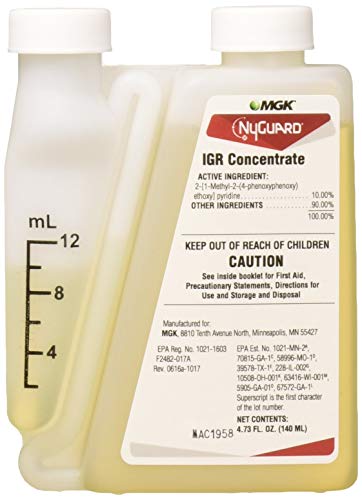 This IGR breaks the reproductive cycle of the toughest insects such as ants, cockroaches, fleas, flies, and mosquitoes. It is labeled for use in the food-handling areas of restaurants, bakeries, and food processing plants.

It is a concentrate, so you’ll need to mix it in a 1-gallon sprayer such as this one or this one. You should also add a strong pesticide, labeled for adult fleas, to the tank when you mix it.

The combination will be a fatal one-two punch to fleas and their young.

This is a commercial-grade pesticide that should be treated with respect. 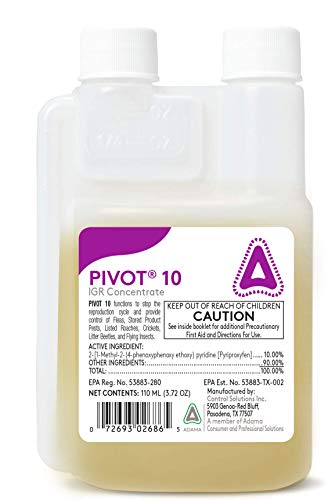 Even though it contains exactly the same active ingredient as NyGuard, in exactly the same strength, this is still the most expensive IGR per ounce on our list. It is a commercial-grade pesticide in a small 3.72-ounce size that’s perfect for home use.

It will last for up to seven months inside, considerably less outside where it is in direct sunlight. It requires the use of a 1-gallon sprayer, power sprayer, or other delivery device.

You’ll have to mix it with a pesticide that is labeled for adult fleas.

This small bottle of concentrate will cover between 6,000 and 13,000 square feet depending on the severity of the infestation you’re facing. 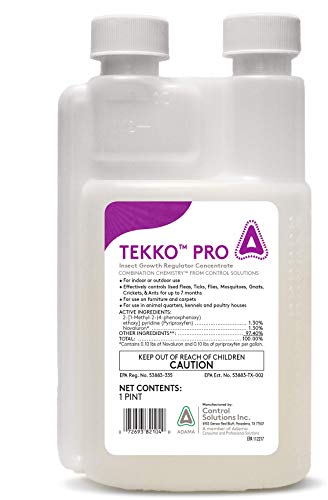 This uses the same active ingredient as NyGuard and Pivot but at a weaker concentration. It is a proven product used by pest control professionals but it doesn’t last as long as the others.

It will have to be applied more often to achieve the same results. It requires the use of a 1-gallon sprayer and a regular pesticide for full effectiveness. 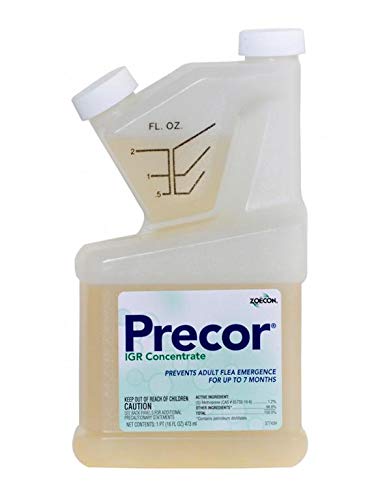 Price-wise, it’s in the middle of the pack but the performance is completely lacking outside in the sun. It won’t work outside at all.

Inside, it will last for up to seven months. One ounce of concentrate per gallon of water will treat 1,500 square feet.

It is safe for pets when it’s dry. It requires the use of a 1-gallon sprayer and the addition of a pesticide that is labeled to kill adult fleas.

This pet-safe aerosol is perfect for homeowners who don’t want to be bothered with mixing chemicals. It contains two main active ingredients, plus a third one that acts as a synergist.

The combined result is an easy to use, all-in-one approach to killing fleas.

It is quick, easy to use, and doesn’t require any tank mixing or additional pesticides.

Pop off the lid, give it a shake, and you’re ready to start killing fleas. One 20-ounce can will treat up to 2,625 square feet.

This is the best all-in-one solution to your flea problems we’ve ever seen.

Curious about other flea related products? Check out our other detailed guides to help you deal with your pest problems.