What is a Mosquito Hawk? (How to Identify Them)

One of the most misunderstood insects in, well, pretty much all of North America, is the poor mosquito hawk. Many people think it’s part of normal mosquito populations, just larger. Others believe it is a mosquito predator, catching and eating mosquitoes for its food.

If you have them in your yard and call a pest management company to complain about them, you may hear some surprising news that you didn’t expect. In this Pest Strategies review we’ll try to give you a little more information on mosquito hawks and exactly what they are – and aren’t.

Short on time? Click here to jump to our suggestions for getting rid of mosquito hawks!

What is a Mosquito Hawk?

A mosquito hawk is a misnomer, a case of mistaken identity. Their real name is a crane fly in the order Diptera, family Tipulidae. Over the years an urban legend of sorts has sprung up claiming that they eat mosquitoes.
Unfortunately for the beleaguered homeowner, nothing could be further from the truth. Crane flies (we’ll use the accurate name for them) don’t eat much of anything once they’re grown. It’s larvae that do most of the eating. Adult crane flies have a long, thin body. Sometimes it is slightly oval. Their body is normally tan or brown, but in some varieties, the female might have a black body with a red band encircling it. They have very long thin legs and only two wings like all true flies in the order Diptera.

As with all true flies, crane flies go through a complete metamorphosis. There is an egg, larval, pupal, and adult stages in their life. The larvae are small, brown, and live moistly in damp soil. Their appearance looks like they’re wearing a leather jacket, hence the name.

What Other Names Are Mosquito Hawk Referred To As?

Common names for crane flies include mosquito hawks, mosquito eater, skeeter eater, gallinipper, golly whoppers, and daddy longlegs. They’re not spiders, of course, but because of their incredibly long legs, they are sometimes mistaken for one.

The scientific names for crane flies are different. Common crane flies are Tipula oleracea, the European crane fly is Tipula paludosa, and crane fly larvae are normally called leatherjackets or leather jackets (either spelling is accurate).

Check out the video below to learn more about the Mosquito Hawk.

What Are Mosquito Hawk Commonly Mistaken For?

Crane flies are often mistaken for other insects, as reflected by some of the common names associated with them. Let’s take a brief look at some of them.

Crane flies are often confused with dragonflies because of their similar appearance. Because dragonflies do eat mosquitoes, the confusion has caused people to associate that behavior with crane flies, leading to them being called mosquito hawks or mosquito eaters.

Crane flies have long deciduous legs (meaning they come off easily) and are mostly brown or tan in color while dragonflies sport bright, almost iridescent colors.  Their body shapes are quite similar but their colors are the main visual difference.

Dragonflies are aggressive hunters but adult crane flies are limited to occasionally drinking nectar and often not even that. Some species of crane flies don’t eat anything at all once they mature. They only live for a few days so they really don’t need to eat.

Both ideas are wrong.

It turns out that daddy longlegs aren’t spiders at all but belong to a different species called Opiliones. While they resemble spiders with their eight legs, they lack two things that make a spider a spider – venom and silk production. Daddy longlegs can’t produce either of those.

There is an urban legend that daddy longlegs are deadly poisonous but their fangs are too weak to puncture our skin. Wrong again. They have mouthparts that are similar to crabs scorpions. They use them to grasp their prey while they eat them.

Daddy longlegs are not spiders, don’t produce poison, and don’t bite humans – like, ever. Consequently, every story that associates crane flies with them is wrong also. A similar appearance doesn’t make them the same, or even close to the same.

Some people think crane flies are large mosquitoes. They see them flying around and think that mosquitoes are coming out larger and at an earlier time of year. Once again, the urban legends are 100% false.

Mosquitoes are aggressive hunters, looking for mammals to feed on, while crane flies are one of the gentlest insects in the world. Many species of adult crane flies don’t even have mouthparts because they don’t live long enough to get hungry.

Crane flies are several orders of magnitude larger than mosquitoes and their wings don’t have the scales that are seen (under a microscope) on mosquitoes. An adult mosquito (female) is a bloodsucker but adult crane flies only exist to mate, lay eggs, and die.

What Do Mosquito Hawks Eat?

That depends on what stage in their life cycle you’re talking about. The adult stages either sip a little nectar from the occasional flower or don’t eat anything at all during their short life span. In the larval stage, it’s a different story.

In the United States, the larvae generally emerge and begin feeding in wet or decomposing leaves or mulch in December and January. They’ll finish their metamorphosis and emerge as adult crane flies in February or March.

Are Mosquito Hawks Poisonous or Dangerous?

Crane flies are the most harmless flying insects you’ll ever encounter. They don’t bite or sting. They don’t transmit diseases. They don’t even destroy blankets or clothes like moths. In fact, they’re normally not even regarded as pests.

The only time a crane fly might be a problem is if one accidentally flew into your mouth when you were yawning or something. (That’s just gross.) Aside from that nasty tasting possibility, you’ll never hear about a crane fly infestation.

The one and only time they’re a problem is if a large enough population of crane fly larvae eats the roots of the grass in your yard. Even that damage is only temporary. As soon as their season is over, the grass will begin growing out again.

Read More: How to Keep Flies Away

Bonus: How to Handle Your Mosquito Hawk Problem?

For the most part, crane flies stay outside. This is because there’s nothing in your house to attract them. They want to mate and lay eggs, preferably in moist soil. Now and then one of them may accidentally fly in through an open door or window, but it wasn’t on purpose.

The best way to handle them is to keep your windows and doors closed. If you like have cool breezes coming in, put some screens over the windows and get a tight-fitting screen door for your doorways.

To prevent them from laying eggs in and around your house, take care not to overwater your yard. Make sure you’ve got good drainage to avoid standing pools of water that will create the kind of conditions they like to lay their eggs in.

Good lawn care is also recommended. During the warm weather when you see a lot of crane flies, keep the yard mowed once a week. Rake up any dead leaves or excess mulch. If you have pine trees, rake up the fallen mats of pine needles too.

If you’re concerned that crane fly larvae are damaging your lawn too much, you can use a combination of Bifenthrin and Martin's I. G. Regulator.

Bifenthrin is a pesticide with good knockdown capabilities for flies and insects of all kinds. Martin’s I. G. Regulator is an Insect Growth Regulator (IGR) that inhibits the growth of the insects affected by it. Both of these are concentrates that will yield several gallons of the finished product for spraying.

You’ll need to mix enough to spray your entire yard, probably between 10-20 gallons depending on the size of your yard. You’ll also need a backpack sprayer to do the spraying. They usually contain 3-4 gallons at a time so you’ll have to go back and mix up a fresh batch of chemical several times until you’re done.

How to Get Rid of Mosquito Hawks (Most Popular Methods)

Hanging a bug zapper with a light in it to attract them is a simple and effective method of getting rid of them. They’ll be drawn to it by the light then receive a sharp electrical zap to kill them dead bang.

Because crane flies are awkward fliers, they often bump into things at random. Hanging some fly ribbon strips around your patio or back yard will be an effective way of trapping and killing them.

Hang the strips at random around your back yard and you’ll be certain to catch many of them. You’ll catch some other flying insects as well. 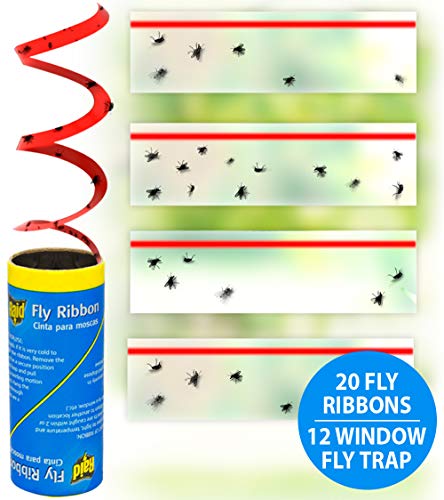 The Raid Fly Ribbon Strips make it easy to get rid of flies, but also these huge mosquito hawks.

Simply hang indoor or outdoor and watch these things attract and trap these pesky flies.

Just be cautious...these things are very sticky so you don't them to get caught on your clothes or skin!

Mosquito hawks, or crane flies, are generally harmless. They don’t bite or sting, and they don’t live long enough to be considered a pest by most pest control experts.

We hope this Pest Strategies review has given you a new appreciation for them and their place in the world.

Curious about other Mosquito guides? Check out our other detailed guides to help you deal with your pest problems.