Looking for an in-depth review of Taurus SC?

What's In This Guide?
Our Review of Taurus SC
What Is Taurus SC and How to Use It?
What’s The Active Ingredient In Taurus SC?
Does Taurus SC Work?
Is Taurus SC Harmful To Humans or Children?
Is Taurus Safe For Cats & Dogs?
Taurus SC vs Other Products?

Our Review of Taurus SC 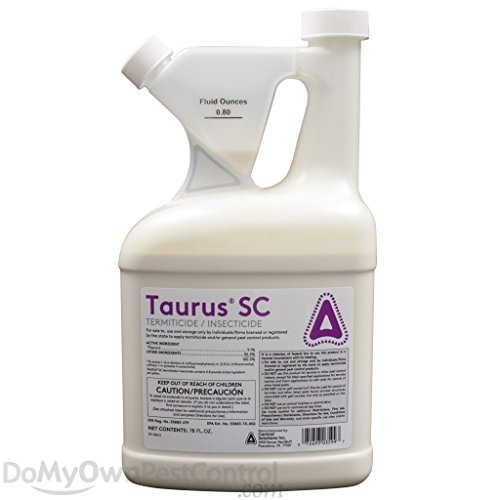 Taurus is classified as a non-repellent insecticide, which means it is undetectable to most insects. They will approach it, touch it, ingest it, and spread it to others without ever knowing it was present in their environment.

As a termiticide, Taurus provides an effective barrier treatment against termites. Once it is properly applied – which involves a lot of elbow grease – it will last for years at a time, killing any termites that approach your house.

It’s impossible to talk about Taurus SC without also talking about Termidor SC. Both of them use the same active ingredient in the same percentage, both have similar appearances, and both are used to exterminate the same pests. So what’s the difference?

As a licensed pest control professional who has used both of them for years, there are plenty of differences. The first one may strike you as odd, but they smell different. Open both of them and take a whiff of each one in turn and you’ll notice it right away.

The active ingredient is 9.1% of the total volume in each one, with the remaining 90.9% taken up by “inert” ingredients.

“Inert” only means the other ingredients don’t kill bugs, but they aren’t just space fillers. They perform valuable functions.

Those functions control how long the product will last in the ground, how well it bonds to the soil, how it transfers between insects, how easily it is absorbed by insects, and dozens of other things. The smell proves they are using different ingredients.

Those different ingredients lead to the main difference between the two products; the price. Taurus has always been less expensive than Termidor. When you need 80-100 gallons for an average sized-house, that price difference adds up in a hurry.

Taurus SC is an effective non-repellent termiticide and insecticide useful for eliminating a wide variety of pests. Applied properly, it creates a barrier against termites that will remain effective for years to come.

What Is Taurus SC and How to Use It?

The SC in Taurus SC stands for suspension concentrate, which means the even distribution in a liquid of tiny, microscopic particles.  The AI, active ingredient, is actually composed of tiny hard particles suspended in the carrying solution.

If Taurus sits on the shelf for any length of time, the particles in it will gradually settle to the bottom, requiring you to shake it vigorously before using it. Shake it for at least two minutes before opening it to ensure the particles are evenly distributed once again.

Taurus should be mixed at a rate of 0.8 ounces per gallon of water, creating a 0.06% solution of the finished product. There is a builtin tip-and-pour measuring spout on each bottle when it arrives to make it easy to get the correct amount without any wastage.

Read Also: How To Keep Ants Away (5 Expert Ideas)

Ant infestations are easy to take care of without messy ant bait applications. Because it’s not a repellent insecticide, the ants walk across it, get it on them, and take it back to the colony where it transfers to their companions, eliminating the entire infestation.

Any kind of spraying will require you some protective equipment such as chemical-resistant gloves, and either a 1-gallon handheld sprayer or a 4-gallon backpack sprayer.

Taurus is designed to be slow-acting though – so target pests spread it around – so if you’re dealing with poisonous spiders like a black widow, it may be a couple of weeks before you see any results.

In order to calculate how much of the finished (mixed) product you’ll need, measure the foundation of the house to determine the linear feet.

Then 20x4 = 80. You’ll need 80 gallons of finished product for the termite treatment.

In a pier-and-beam house, also 70x30, you’ll need to spray 80 gallons around the underpinning beneath the house as well as another 2 gallons for each pier under the house. With 20 piers that would be another 40 gallons.

Prior to spraying, use a pickaxe to dig a trench around the foundation, right up next to it. The trench needs to be four inches wide and six inches deep. An experienced pest control exterminator can trench a slab house in about 45 minutes to an hour.

Under a house in a crawl space, you’ll need some coveralls, a flashlight, and a hand pickaxe. If you’re claustrophobic, you’ll have to hire someone to do it for you. Expect the trenching under a house to take longer than trenching a slab house.

Whether you’re spraying a slab or a pier-and-beam, if you’re a DIY enthusiast, you’ll need a 100-gallon spray rig, which is expensive. Alternately, check with the equipment rental companies in your town to see if they have spray rigs for rent.

The pressure on a large spray rig should be about 50-60psi. In addition to chemical-resistant gloves, also add some safety goggles to protect your eyes from the termiticide splashing back in them, and at 50-60psi it will be splashing all over the place.

The active ingredient in Taurus SC is Fipronil, an insecticide that belongs to the henylpyrazole chemical family. According to the government, it’s a highly effective and broad-spectrum insecticide, best applied at low or very low rates.

The recommended rate on the product label is 0.06%, which is six one-hundredth of a percent. This is only a fraction of a tenth of a percent. At that rate, it is sufficient to kill a multitude of insects and remain active in the soil for years.

Fipronil is also the active ingredient in several brands of granules used for controlling fire ants. They aren’t baits as they don’t have any attractants in them. Instead, they create a wide layer of pesticide over the treated area.

Read Also: What are the top killers for fire ants?

These granules have a long residual impact, lasting for 8-12 months or longer. Granules with Fipronil are more expensive than normal fire ant baits, but the year-long impact delivers better results over a longer time, regardless of the weather.

Weather is a huge shortcoming for most fire ant baits so this is a great advantage that can’t be underestimated.

Provided it is applied consistent with the instructions on the product label, Taurus works quite well. It works by disrupting the normal functioning of the central nervous system in insects.

It does this by blocking the chloride channels that are associated with the gamma-amino butyric acid (GABA) and glutamate (Glu) receptors in the insect’s central nervous systems. In other words, it’s a neurotoxin for insects.

Is Taurus SC Harmful To Humans or Children?

The toxicity of insecticides is measured according to its LD50 value. This is the amount of a substance needed to create a Lethal Dose in 50% of the lab animals it is tested on. Fipronil, the active ingredient in Taurus, is considered moderately toxic.

This translates to an LD50 of 500 milligrams of Fipronil per every kilogram of body weight of the test subject.

Is Taurus Safe For Cats & Dogs?

Cats and dogs are more sensitive to pesticides than people are, due primarily to their smaller size and body mass. Their biology is also sufficiently different from ours to make them susceptible to chemicals we can tolerate.

Fipronil is the active ingredient in many flea collars and treatments for cats and dogs, but it is specially formulated with other “inert” ingredients to protect the animals. The Fipronil in Taurus doesn’t have that builtin protection.

However, in my personal experience killing termites over a 14-year period, I’ve seen pets, dogs mainly, lapping up Taurus out of a newly filled trench without any ill effects.

It must not taste good because they always stop right away, but none of them ever got sick. Cats that have escaped from the house, or whose owners let them run free, turn up their noses at it. They’ve never shown any interest in drinking it.

Based on that personal experience as well as the published LD50 values, you don’t have to worry about your pets being harmed by Taurus.

Taurus SC vs Other Products?

In a head-to-head competition between Taurus SC and Termidor SC, we have to choose Taurus. It wasn’t always like that but as Taurus has improved and Termidor has remained expensive, we’ve switched our allegiance. But what about other products?

Phantom is an older non-repellent termiticide that preceded the development of Fipronil. The active ingredient in it is Chlorfenapyr at 21.45%. It requires three ounces of the concentrate per gallon of water.

It doesn’t last nearly as long as Fipronil and it’s much more expensive than Taurus, particularly when you need to mix a hundred gallons or more to treat a house for termites. Since the advent of Taurus, Phantom is more often used to treat ants.

Fuse uses a combination of Imidacloprid 21. 4% and Fipronil 6. 6% as the active ingredients. Imidacloprid mimics nicotine, which is toxic to insects. It works fairly quickly on their central nervous system and the Fipronil provides long-term protection.

One 27.5-ounce bottle will create 50 gallons of finished product, which makes it cheaper than Taurus. Unfortunately, some termites have developed a nicotine resistance that protects them from Imidacloprid.

Dominion uses Imidacloprid 41.4% as the sole active ingredient. A 27.5-ounce bottle that costs less than $40 will create 50 gallons of finished product, so this is the poor man’s termiticide.

Three years is about the most you’ll get out of Dominion, so it doesn’t last as long as Taurus. If the termites at your house aren’t nicotine resistant you’ll be fine with this one, but in case of doubt, stick with Taurus.

Curious about other pest control products? Check out our other detailed guides to help you deal with your pest problems.