Looking for an expert review of popular insecticide Talstar?

In this guide you’ll learn the following:

What's In This Guide?
Our Review of Talstar Professional
What Is Talstar?
What’s The Active Ingredient In Talstar?
Does Talstar Work?
Is Talstar Safe For Cats and Dogs?
Is Talstar Harmful To Humans or Children?
Talstar Vs Other Products?
Most Popular

Our Review of Talstar Professional

Talstar P works for over 75 different species of insects, earning it high praise from professionals and excellent customer reviews from homeowners who have used it themselves. It started life as a termiticide and its use has grown over the years.

Sometimes known as Talstar One or Talstar Professional, it is widely available for a reasonable price to anyone who wants to use it. It is a cost-effective means of protecting your home from pests all year long.

It is easy to use, generally safe, and odor-free. It is labeled for use around homes, offices, restaurants, hospitals, warehouses, motels, schools, and food processing facilities. It dries quickly and doesn’t leave an unsightly residue.

It kills many pests within hours of its application then creates a residual barrier of repellent to kill insects or keep them out for up to three months before it has to be resprayed. One 3/4-gallon jug can create up to 96 gallons of the finished product.

This is a fast, effective, and easy-to-use pesticide that lasts a long time, won’t eat up your budget and is safe when used as directed.

While all of them work to one degree or another, Talstar P, or Talstar Professional (the two terms are synonymous) Insecticide stands out in the crowd as a broad-spectrum synthetic pyrethroid that kills 75 different insects, including termites.

Talstar P Professional insecticide is a liquid concentrate insecticide produced by FMC Global Specialty Solutions. It works inside and out, it’s water-based, virtually odorless, won’t damage plants or crops, and doesn’t leave behind any unsightly residue.

It can be used in crack and crevice applications inside the house, as a barrier around windows and doors to bugs out, as a soil treatment around the perimeter of the house to kill termites, and for fogging trees and bushes to kill mosquitoes.

It’s a water-based insecticide with an attractive three-month residual impact. During that time, it keeps on killing most insects that try to invade your house. It’s powerful, effective, and well-regarded by professionals in the pest control industry.

What’s The Active Ingredient In Talstar?

The active ingredient Talstar Professional insecticide is Bifenthrin 7.9%. It’s a synthetic pyrethroid that mimics the action of natural pyrethrins found in chrysanthemum flowers.  Bifenthrin can be applied in sprays, aerosols, and granules.

Pyrethrins and pyrethroids attack the sulfur channels in the central nervous system of insects. It alters the nerve function, eventually leading to paralysis and death. Insects absorb it by contact or ingestion. Pyrethroids are more stable in sunlight than pyrethrins.

Bifenthrin is the active ingredient in over 600 different products available in the United States. It is found in Bifen IT, fungicides, Talstar Granules, and more. There isn’t a pest control company or exterminator in America who hasn’t used Talstar.

It has a fast knockdown when used for mosquito control, usually within a few hours. It lasts up to 90 days, inside and out, against “normal” insects, killing them as well as acting as a repellent to drive them away.

For most applications, mix one fluid ounce of Talstar concentrate with one gallon of water, resulting in a finished product with a concentration of 0.06%. This is the best concentration for spraying crevices and along baseboards where insects hide.

If you have a heavy infestation or you’re spraying in food-handling areas where there is a lot of water, bump the concentration up to two ounces per gallon of water creating a finished product with a 0.12% concentration. This  video shows how to mix it.

Talstar insecticide is a great product that doesn’t require the use of a respirator when you’re applying it. Furthermore, you can re-enter the treated areas very quickly after the application, which brings us to our next subject – safety.

Is Talstar Safe For Cats and Dogs?

The only honest answer is; it depends. When Talstar is applied in accordance with the directions on the pesticide label, it is safe around your pets. When it comes to pesticides and their applications, the label is the law. You must obey it at all times.

Most pesticides, including Talstar, are hazardous to fish and birds. If you have an aquarium or birdcage in your house or business, cover them before you begin spraying and keep them covered for at least an hour after you’ve finished.

Is Talstar Harmful To Humans or Children?

This is a bit trickier. Older pesticides such as organophosphates and carbamates are considered quite hazardous and even toxic to human beings as well as pets and livestock. Extreme care had to be exercised when using them.

The newer pesticides, especially those like Bifenthrin that mimic the action of botanical pesticides, are much safer. The botanical extracts are extremely safe and the synthetic versions copy their mode of action.

Adults generally don’t have any problems being around Bifenthrin. If you accidentally get sprayed in the face with it or get it all over your hands, just wash it off and keep on going. You’ll be fine. (Been there, done that.)

Children are a bit different though.

Small children, infants through early prepubescents, have very immature bodies. Their brains, nervous systems, and other organs are still developing after birth, particularly their liver and kidneys. Even small amounts of a toxin can be hazardous to them.

Infants have an even higher risk because they crawl around on the ground then put their hands and feet in their mouths along with any stray item they might pick up. For this reason, it’s advisable to keep small children out of the treated area for 24 hours.

Talstar Vs Other Products? 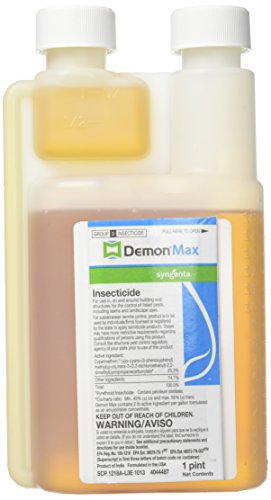 In Demon Max, the active ingredient is Cypermethrin at 25.3%. Cypermethrin is a pyrethroid similar to Bifenthrin but an older one that was originally formulated as a dry powder. It became unpopular due to the highly visible residue it leaves behind.

However, Cypermethrin is also very effective so several liquid versions, such as Demon Max, have been developed over the years. Most modern versions of Cypermethrin, or Cyper, don’t have an odor but Demon Max does.

It doesn’t extend quite as far as Talstar. A 16-ounce bottle of Demon Max will only make 12 gallons of the finished product. Demon Max is inexpensive, but we have to give this one to Talstar Professional.

ß-Cyfluthrin or Beta-Cyfluthrin is another pyrethroid similar to Bifenthrin and Cypermethrin but it has a different mode of action. It is considered primarily a stomach poison, although it also attacks the sodium channels in the central nervous system.

It is almost completely odorless, doesn’t stain or leave unsightly residues when it dries, has a fast knockdown, and a good long-term residual impact. One 8-ounce bottle of Tempo will make 30 gallons of the finished product.

We have to call this one a tie.

Permethrin SFR, as you might imagine from the name, is another pyrethroid. One 32-ounce bottle will make anywhere between 40 and 100 gallons of the finished products depending on the concentration you mix it at.

However, Permethrin SFR has one thing Talstar never will – an incredibly strong odor. There’s no getting around it, Permethrin stinks. It always has and it always will. It’s dirt cheap since it’s one of the older pyrethroids on the market but the smell is undeniable.

For indoor use, we can recommend Bifenthrin without any hesitation. Outside, where there is plenty of ventilation, the cost might be a more important consideration. After about 24 hours, any lingering odor will be blown away so it might be a better buy.

We’re going to have to call this one a tie also. 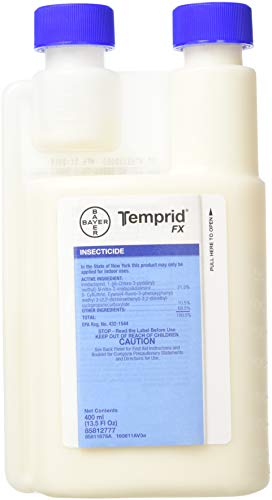 Temprid stands out from Talstar and its competitors because it has two active ingredients. One is ß-Cyfluthrin at 10.5 % but the other is Imidacloprid at 21%. Imidacloprid isn’t a pyrethroid, it’s a neonicotinoid.

Neonicotinoids act on the central nervous system in insects but in different ways than pyrethroids. It is similar to natural nicotine, binding to a specific site on neurons, the nicotinic receptor. It causes paralysis leading to death, often in a matter of hours.

Imidacloprid is what is known as a systemic insecticide. That means plants can absorb it from the soil and spread it throughout their leaves, stems, fruit, and flowers. When an insect eats any part of the plant, it is exposed to the Imidacloprid.

Temprid doesn’t have a strong odor, it can be used inside and out, it dries quickly, and doesn’t leave an unsightly residue. The long-term residual impact is significant though, especially on scorpions and spiders. It kills over 50 different household pests.

Given the double active ingredients, we’re inclined to give this one to Temprid, but the steep price for a 13.5-ounce bottle means it doesn’t go as far as Talstar. If you’re fighting scorpions and spiders, this is the better choice.

Other than that though, we have to give this one to Talstar.