Looking for an in-depth review of prodiamine?

Our Review of Prodiamine

On a scale of one to five, with five being best, we give Prodiamine five stars. 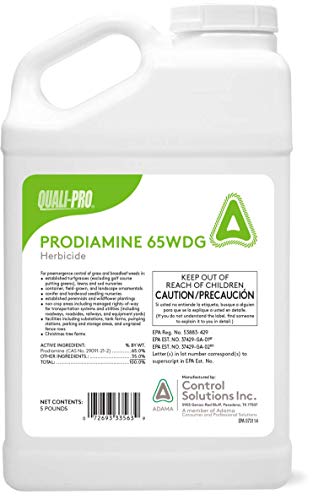 It is a pre-emergent herbicide for killing weeds before they sprout and grow through the surface of the soil. The EPA has approved it for use on golf courses, on established turf grasses, lawns, and sod nurseries.

It has also been approved for use in conifer and hardwood seedling nurseries, managed rights-of-way for transportation systems and utilities (including electrical transmission lines and gas lines), roadsides, railways, tank farms, pumping stations, and more.

It is manufactured in Raleigh, North Carolina, and can be somewhat harmful if the dust is inhaled. It should not be used on land that will be grazed or used by livestock, nor should it be sprayed on plants that are intended for human consumption.

The chemical name is 2,4-dinitro-3-N,3-N-dipropyl-6-(trifluoromethyl)benzene-1,3-diamine and takes the form of small gold, yellowish granules that dissolve in water before being sprayed.

What’s The Active Ingredient In Prodiamine?

Prodiamine is the active ingredient. In this case, the product name, Prodiamine 65 WDG, was taken from the common name for the herbicide. It’s a professional herbicide so there aren’t a lot of fancy trade names for it.

Prodiamine works beautifully, if and only if, you use it correctly. If you use it incorrectly, you’ll get partial results at best, no results at worst. We’ll discuss how to use it then give you some reasons why it might not work.

How To Use A Herbicide

Fill your handheld sprayer or backpack sprayer with water only. Mark off 1000 square feet or one acre and begin spraying the water at your normal walking speed, covering every inch of the ground in the area. This is your test run.

When you’re finished with the test run, measure how much water you used and write it down. You’ll need it later.

When you’re ready to spray the herbicide, put in the amount of water you used during your test run, add the correct amount of herbicide for the size of the area you’re treating, and mix it vigorously.

When you begin spraying, make sure you do it at the same speed as during your test run. If you spray too much or too little any in one spot, you’ll create problems for yourself later on.

If the weeds have already germinated and poked their way through the soil, it’s too late to kill them, even if they’re listed on the label as ones that Prodiamine will kill.

You need to familiarize yourself with the weeds in your area and find out as much about them as you can. You need to know when they germinate because this will tell you when to spray the herbicide to kill them.

For example, to kill crabgrass in the southern parts of Texas, the Deep South, Florida, Southern California, and parts of Arizona, between January and March is when it germinates in that part of the country, so you need to spray early.

Across the northern part of the United States bordering Canada, crabgrass doesn’t germinate until after May 30.

Other areas of the country fall somewhere between those two extremes.

Read Also: What are the top weed killers for your grass?

Is Prodiamine Harmful To Humans or Children?

The toxicity rating for Prodiamine is Not Acutely Toxic to people and other mammals. There is no long-term toxicity rating for people or animals, nor is there any information regarding its impact on honeybees. It does have a high runoff risk in the event of rain.

The REI (Restricted Interval Entry) for Prodiamine is 12 hours. That means you need to wait 12 hours after spraying to enter the treated area. This gives it time to leach into the ground and fully dry.

The label recommends PPE (Personal Protective Equipment) during spraying of coveralls, chemical resistant gloves, boots, and socks. As long as you follow these simple rules, it will be safe for you and your children.

Is Prodiamine Safe For Cats & Dogs?

The precautions and warnings applicable to people also apply to cats and dogs. However, cats and dogs tend to be more sensitive to chemicals than people, especially the smaller ones. There’s no direct evidence it’s harmful but better safe than sorry.

Keep all your pets and livestock away from the area while you’re spraying and for the full 12 hours afterward too. Once it’s completely dry, you can allow them to enter the area.

Prodiamine Vs Other Products?

The active ingredient in Pendulum is pendimethalin. It is labeled for use as a pre-emergent against most annual grasses and broadleaf weeds. It can be used around field crops such as corn, cotton, peanuts, potatoes, rice, tobacco, and sunflowers.

It is primarily a pre-emergent herbicide but with some use as an early post-emergent one as well. It has a wider use than Prodiamine but also a somewhat higher level of toxicity, so there is a trade-off.

The active ingredient in Dacthal 75WP is DCPA aka chlorthal dimethyl. This one is so safe that the LD50 (lethal dose to 50% of test animals) values are difficult to obtain. It takes over 10,000 milligrams per kilogram of a dog’s weight to cause measurable harm.

Like Prodiamine, it is a pre-emergent that kills a wide range of annual grasses but Prodiamine kills more broadleaf weeds.

The active ingredient in Preen is trifluralin. In 1979, the EPA brought trifluralin under special review because of N-nitrosamine contaminants that were known to cause tumors.

The manufacturer has resolved the problem since then, but the EPA has imposed a requirement that N-nitrosamine contaminant levels have to remain below 0.5 ppm, so you might see that on the label.

It’s Not Acutely Toxic to people and other mammals and kills much the same weeds as Prodiamine. Depending on where you purchase it, it might be a bit more expensive though.

Curious about other pest control products? Check out our other detailed guides to help you deal with your pest problems.