You might even be asking, what is a potato bug?

The name potato bug is actually a bit misleading because the same name is applied to two different bugs. They’re different in appearance, size, habitat, and diet. This creates a lot of confusion even among licensed pest control technicians.

In this guide, you will learn:

Short on time? Click here to jump to our suggestions for the complete removal of potato bugs.

What are Potato Bugs?

Because the generic name ‘potato bug’ is used to refer to two different types of bugs, the first thing we’ll do is use different names for them.

Instead of chirping, they make a kind of hissing noise by their hind legs across their abdomen to warn off predators. Also like grasshoppers, they make a song during mating season by bumping their bodies on the ground, producing a drumming sound to attract a mate.

Like the black widow spider, the females often eat their mates after they have finished mating. Then they lay their eggs in shallow holes in the ground.

They are nocturnal insects who spend much of their time underground. Their preference for dark places leads to them burrowing into piles of mulch and other organic material.

The Leptinotarsa decemlineata, the Colorado potato bug or Colorado potato beetle, is the other. They are native to most of the United States, including Hawaii and Alaska, but aren’t normally found in California or Nevada. They also live in parts of Europe and Asia.

The Colorado potato beetle life cycle is to spend the winter underground then emerge to lay eggs on the underside of leaves when spring arrives. They’ll generally make their appearance around the same time potatoes start to emerge from the ground and grow tubers, hence the “potato bug” name.

The female lays 20-30 bright orange, football-shaped eggs at a time, attaching them to the underside of leaves with a yellow adhesive excretion. The eggs are less than 2mm in length and the female can lay large numbers of eggs, up to 700-900 of them in her short lifespan.

Are Potato Bugs Poisonous or Dangerous?

Neither type is poisonous. However, the Jerusalem cricket can deliver a painful bite if you agitate them. They normally prefer to escape, but if backed into a corner their large powerful jaws can definitely bite hard.

Colorado potato beetles, by contrast, are virtually harmless to humans. The main concern with them is the damage they can do to your potato crops if sufficient numbers of them hatch at once to create an infestation.

Check out the video below to explore how to get rid of potato bugs with a home remedy.

Read More: How to Get Rid of Japanese Beetles

Jerusalem crickets have been known to have a strangely alien appearance to them. They’re quite large, reaching up to 2-1/2 inches in size. Their head looks too large for their body and they have strangely human-like heads with huge jaws. 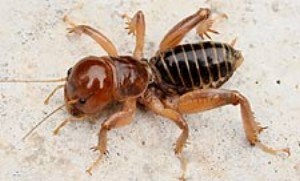 Their thick, spiny legs are an amber-yellow color and are used to dig in the dirt. Their abdomens have alternating black and brown stripes, with tiny ridges. Their hind legs look like cricket legs.

The Colorado potato beetle is much smaller, only about 3/8 of an inch in length and look much more like a traditional beetle with a round, oblong body and a small head. They have alternating black and pale stripes on their orange-tinted bodies. 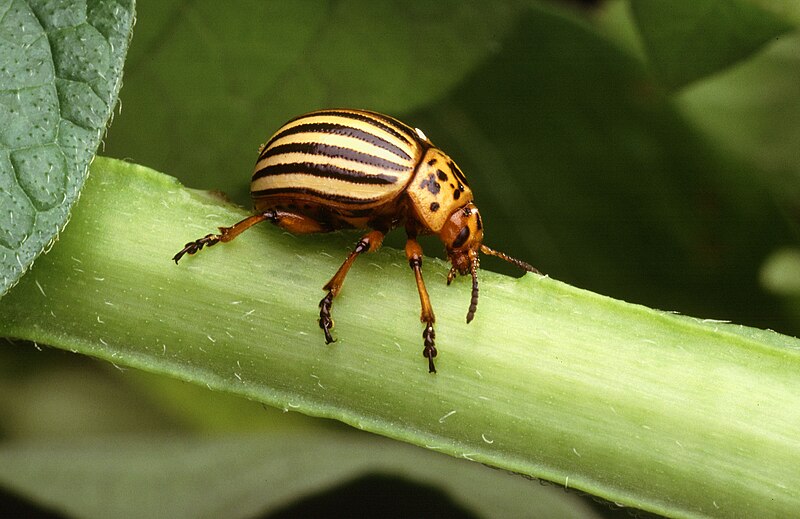 Their head has black, irregular-shaped spots on it with string-of-pearls antennae. They have hard wings and can fly, thus presenting the possibility of a swarm invading your house.

Read More: How to Get Rid of Carpet Beetles

What Are Potato Bugs Commonly Mistaken For?

Jerusalem crickets are often mistaken for grasshoppers or ordinary crickets – at first glance. They’re in the order Orthoptera, so they have the same basic body shape as a grasshopper. Once yous see the head and jaws though, you’ll know they’re not a cricket.

Colorado potato beetles are easily confused with a myriad of other beetles. Their body shape and coloration can be mistaken for some other beetle and you won’t realize the threat to your crops until the damage has already started.

Jerusalem crickets are often mistaken for spiders due to their size and noticeable legs. However, upon closer inspection, you can easily tell it only has six legs instead of eight, the classic sign of an insect rather than an arachnid.

What Do Potato Bugs Eat?

A common question is, what does a potato bug eat? Like all the other questions on this subject, it depends on which potato bug you’re talking about.

Despite often being erroneously called potato bugs, Jerusalem crickets are not major pests for potato plants. Instead, they normally feed on various meats from dead animals and insects, fruits, and tubers. Except in rare cases, they’re not a major pest in potato fields.

They prefer to consume a range of meats, little pests, fruits, origins as well as tubers. Since they lag their eggs in the ground, they will eat whatever is closest, whether it is plant roots or dead insects.

Read More: How to Get Rid of Crickets in Your House

The same can’t be said for the Colorado potato beetle. They are a major pest, laying their eggs on potato leaves which then hatch and begin feeding on the potato plants and tubers. Since the female lays so many eggs at a time, they can multiply rapidly and become a serious threat to the crops.

How to Handle Your Potato Bug Problem?

Potato bug control takes different forms based on which one you’re having a problem with. Aside from the obvious tactic of spraying with pesticides, are there any other methods of handling them? Yes, there are.

Because Jerusalem crickets seldom show up in devastating numbers, the available methods for handling them when they do are limited to physical elimination and disposal, baiting, bug traps or sticky boards, spreading diatomaceous earth, or spraying with a solution of Neem oil.

Since they prefer dark, damp places, another method of combating them or preventing them from appearing in the first place is to eliminate places where they can hide. This would include stacks of wood or lumber, rocks, and thick brush piles.

One method of handling Colorado potato beetles is crop turning; growing non-nightshade plants instead of nightshade ones. Grow such things as beets, butternut squash, parsnips, and sweet potatoes. You can also grow herbs like garlic, ginger, horseradish, and wasabi

You can handpick the beetles and their eggs from the plants, use pesticides, or introduce natural predators like the spiny soldier pest. They’ll eat the eggs and larvae, which will gradually eliminate the beetles from your fields. Pesticides are also an option.

How to Get Rid of Potato Bugs (Most Popular)

It’s unlikely you’ll need to eradicate Jerusalem crickets in a major way. If you do, diatomaceous earth or spraying with a solution of Neem oil are popular, low-impact methods that are environmentally friendly.

A 4lb bag of diatomaceous earth normally costs less than $10 and is 100% safe to use in your garden or crop fields, and it won’t hurt your pets or children either. Spread a thin layer of it around your crops or on them and when Jerusalem crickets crawl over it, it will begin dehydrating and killing them.

Neem oil, from the native neem trees in India and Pakistan, has been used as a naturally occurring pesticide for hundreds of years. It contains a chemical called Azadirachtin which repels insects. Neem also inhibits the ability of insects to feed and deteriorates their exoskeleton.

To make your own DIY solution, combine 4 tsp of neem oil with a tbsp of liquid soap to act as a surfactant. A surfactant is an additive that makes the solution stick to the surface it is sprayed on. Add one gallon of distilled water. Shake well then spray lightly on your crops.

These bugs are naturally resistant to most synthetic pesticides such as bifenthrin carbaryl, lambda-cyhalothrin, cypermethrin, imidacloprid, permethrin, deltamethrin, and pyrethrins. Pesticides based on these active ingredients won’t work on them.

A neem oil solution is the best spray you can use to kill potato bugs of either variety. It is harmless to humans. In fact, it’s edible. It won’t harm your crops and there are no pesticide residues to worry about.

Diatomaceous earth is also edible and environmentally friendly. If you’re in an area where there is a lot of rain, this would be the best method of potato bug control because it won’t dissolve in water.

In case of an emergency where you need to kill a lot of bugs in a short amount of time, spray them with a Bifenthrin-based pesticide such as Talstar. Remember, this won’t work on Colorado potato beetles, only on Jerusalem crickets.

Curious about other pest-related articles? Check out our other detailed guides to help you deal with your pest problems.

How do bed bugs spread? This is a question that has been plaguing most of world for the last couple[...]
Read More
Common house spiders, they’re in your walls, attic, making random cobwebs in parts of your house, but what do you[...]
Read More
Ants are insects like wasps and bees. They are on every continent except Antarctica, and they become pests when they invade[...]
Read More
Imagine this. You’re on a well-deserved vacation in the Caribbean, and you’re trying to take an early morning stroll along[...]
Read More