Japanese beetles are an imported scourge for farmers across the United States. There are over 300 different types of plants they will attack and destroy every year. They are such a problem that researchers went right to work creating lures that would trap them.

Modern traps use a food lure and a sex lure that uses pheromones. The double action of combining both lures into one has proven highly effective at drawing them in from a wide area. Therein lies the problem. 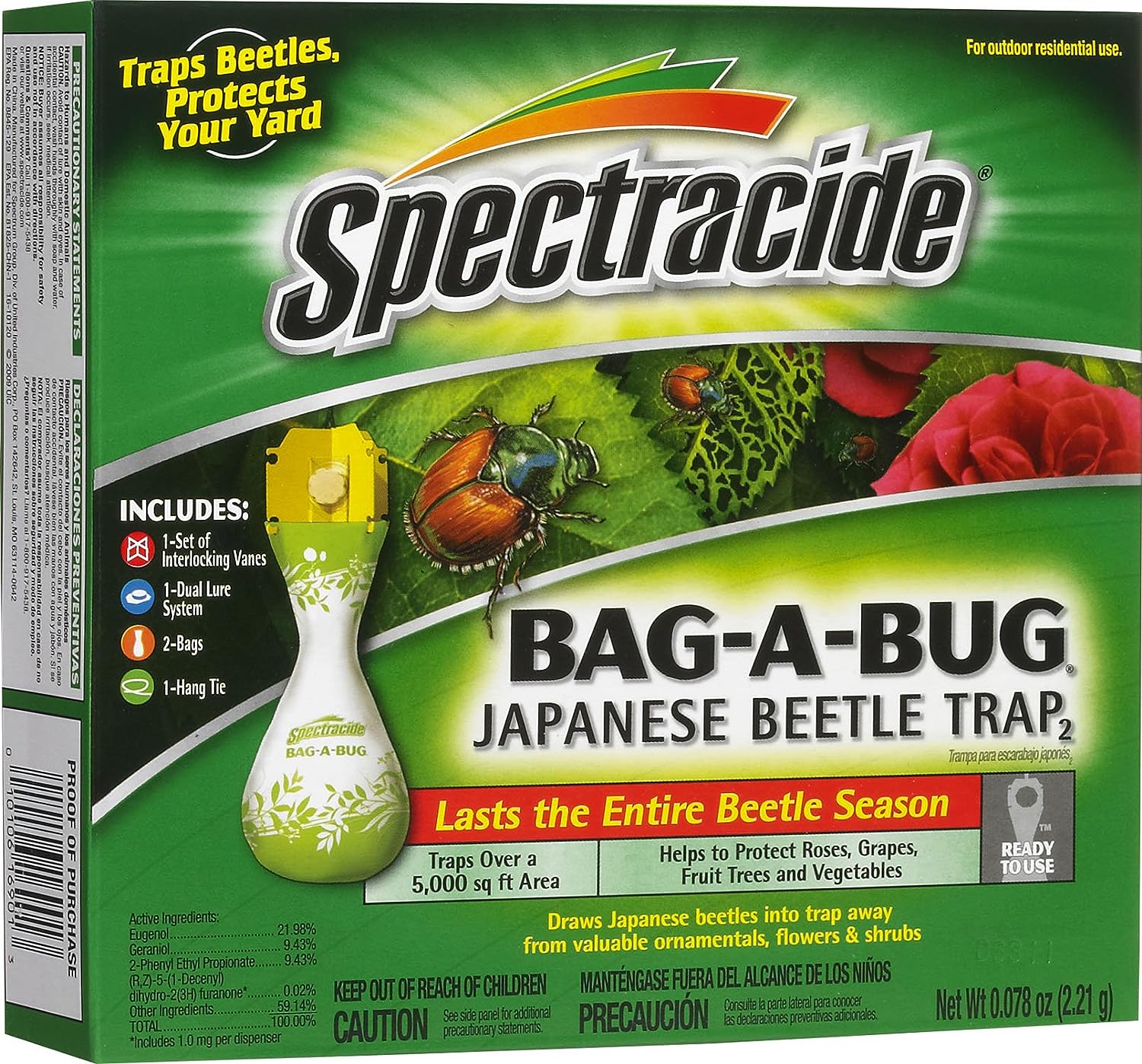 VIEW ON AMAZON
Spectracide Bag-A-Bug Japanese Beetle Trap
This trap uses a powerful dual lure with both food and sex pheromones that attract Japanese beetles from a 5000 square foot area. Hang it about 30 feet downwind from any plants and vegetables you want to protect.
FEATURES

The lures work too well. They wind up drawing in more Japanese beetles than normal. Even after accounting for the ones the traps catch and kill, you still wind up with an excessive number of beetles that wouldn’t have been there if not for the traps luring them in.

Traps can be part of your overall strategy to get rid of Japanese beetles, but they can’t be the only part. Here in this article, the first part of a 2-part mini-series, we’ll cover the traps you can use as part of that broad strategy.

Then we recommend that you read our companion piece, part 2 in our mini-series, on How to Get Rid of Japanese Beetles, where we show you how to eradicate them completely.

So, let’s get started.

This trap uses a powerful dual lure with both food and sex pheromones that attract Japanese beetles from a 5000 square foot area. Hang it about 30 feet downwind from any plants and vegetables you want to protect.

Be careful not to handle the attractant with your bare hands, otherwise, you’ll get the smell on you and the beetles will be drawn to you. It takes soap and hot water to wash it off, so it would be advisable to wear latex or nitrile gloves when assembling it.

Check the bag every few days. When it gets full, dispose of it and install a new bag.

What Are Japanese Beetle Traps?

Japanese beetles (Popillia japonica) were accidentally imported into the United States in New Jersey, around 1916. In Japan, natural predators kept them in check and the surrounding oceans prevented them from spreading. In the U.S., neither exists to stop them.

They quickly spread, triggering eradication and quarantine efforts at both the state and federal level – efforts that utterly failed. Therefore, attention was turned to methods of controlling them. Along the way, attractant lures were discovered and used to create traps.

Japanese beetle traps typically consist of yellow vanes in a crisscross shape with the lure fixed in the middle. Adult Japanese beetles are drawn in by the odor of the lure and bang into the yellow vanes. Then they drop down into a catch bag.

The catch bag is normally an hourglass shape, which prevents the beetles from being able to escape. For best results, the trap should be hung from a stand 4-5 feet high.

How Do Japanese Beetle Traps Work?

Japanese beetle traps use a two-part lure to attract the beetles.

The food lure part of the attractant draws in the beetle population that is looking for something to eat. It emits an odor that smells like a damaged flower. This attracts both the male beetles and female beetles.

Once they fall into the bottom part of the trap, the narrow opening at the top confuses them. They’re unable to figure out how to successfully navigate the small opening directly above them. The sun warms the bag until they die from the heat.

Dead beetles begin to smell bad very quickly. If the odor becomes too strong, it will overpower the attractant and other beetles will stop coming to the trap. Therefore, you need to empty the bag at least once every couple of days.

How Do You Find The Best Japanese Beetle Traps?

You should read articles like this one. Here at Pest Strategies, our staff is composed of licensed pest control professionals who have years of personal experience out in the field killing bugs of all kinds.

We’ve used pest control products and equipment on a daily basis and fully understand their limitations, uses, liabilities, and advantages. We can steer you toward the best products for every conceivable pest and situation – because we’ve used them.

Check out the video below to learn how to make a DIY Japanese Beetle trap!

Absolutely. As noted earlier, though, that’s the problem with them. We’ve discovered that an infestation of Japanese beetles can’t be cured by trapping them. Their numbers are simply too high because there aren’t any natural predators in the United States to keep them in check.

Japanese beetle damage in the United States tops $400 million per year, with no end in sight. The traps for Japanese beetles were developed to combat them.

Researchers at universities around the country are highly motivated to find ways to control the beetle population and unfortunately have confirmed what pest control professionals in the field had discovered – that traps attract beetles from the surrounding area and make the problem worse.

How To Use A Japanese Beetle Trap

Assemble the trap according to the instructions that accompany it then hang it from a rod or hanger. Don’t hang it from a tree! That will only subject the tree to an additional invasion of beetles.

Position the traps a minimum of 30 feet away from the plants and bushes you’re trying to protect. The idea is to draw beetles away from the protected plants rather than toward them.

Are Japanese Beetle Traps Safe Around My Pets And Children?

Yes. In fact, your pets and children are more of a danger to the traps than the other way around. Cats and dogs can rip or bite holes in the bags, letting the beetles escape. Playing children can knock the trap over or tear it or punch holes in it with their toys.

The only hazard to your pets or children is if they physically handle the lure and get the smell all over them. The beetles will then be attracted to them and start swarming around them.

This trap uses a powerful lure that attracts Japanese beetles from a 5000 square foot area. Hang it about 30 feet downwind from the plants and vegetables you’re trying to protect.

Check the bag every 2-3 days. If it gets too full, tie it shut and install a new bag. 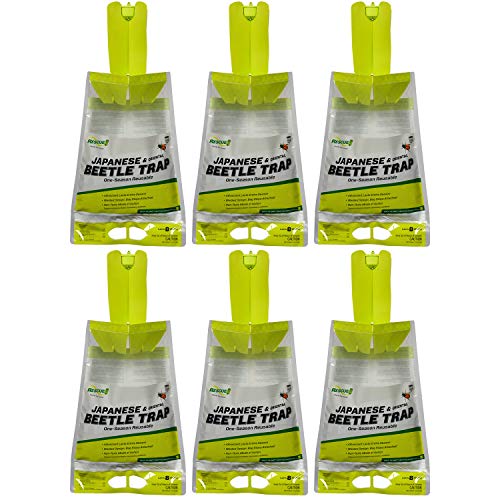 This trap should be placed around the outsides of the area you’re trying to protect, with at least 30 feet between it and the nearest plants the beetles have been attacking. The bag is well designed and easy to prepare for use.

When the bag is full, there is a zipper at the bottom of it so it can be emptied into the trash then reused. The inner panels create a funnel in the bag which prevents the beetles from getting out once they’re in it.

The bag is made of durable nylon and each one comes will all the accessories you need. There is no need to buy anything else. 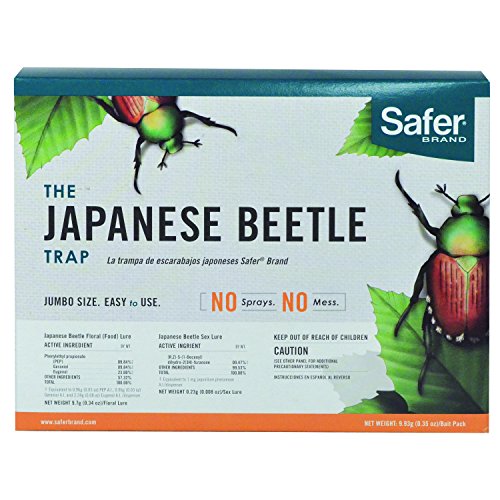 This Japanese beetle trap contains two jumbo-sized, dark green bags. Each one uses an hourglass shape to prevent the beetles from getting back out once they’re inside. The lure uses a time-release system to ensure the lure lasts the entire season.

It comes with a galvanized steel stand, vans, lure, and two jumbo bags. When one bag is full, tie it closed and throw it away. Put up the next bag and keep on catching beetles.

The dual release food and sex attractants lure the beetles in and disrupt their mating cycle at the same time. This makes it an extremely effective system. 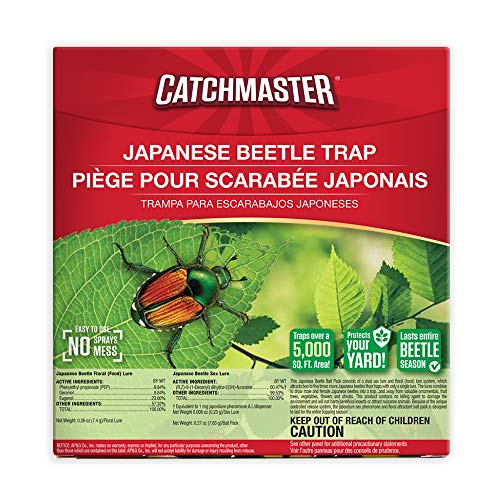 This Japanese beetle trap stands out from the rest due to the lid that is included with the system. It hangs over the opening to the trap to prevent the entry of rainwater.

It covers 5000 square feet using an industry-standard dual release lure with both food and sex (pheromone) lures. The beetles are attracted, hit the yellow vanes, and fall into the hourglass-shaped bag and become stuck.

The lure will last for the entire beetle season and the bags can be reused over and over. You need to hang this bag out in the middle of the yard or 30 feet away from the plants you’re trying to protect.

This trap uses a double lure to attract Japanese beetles from a 5000 square foot area. Hang it about 30 feet downwind from the plants and vegetables you’re trying to protect.

Once in place, the beetles will be drawn to it from all directions. The long-lasting lure will last all season and the disposable bags keep you from having to come into direct contact with the dead beetles.

Effective Japanese beetle control requires a full spectrum methodology of traps, grub eradication using beneficial nematodes, milky spores, and even hand picking them off your plants to get rid of them. No single method by itself is enough.

Row covers, the use of insecticidal soap, and drop cloths are additional methods to use against these garden pests. To learn how to put it all together, read our next article in this 2-part mini-series, How to Get Rid of Japanese Beetles.

Curious about other pest-related products? Check out our other detailed guides to help you deal with your pest problems.